Tina Klaus is just like every other college student. She's pretty, smart and has a crazy family, squabbling about the family business. But her REAL name is Santina Claus and her father? Santa Claus. The family business? You guessed it. Santa is getting on in years and is thinking of retiring, but Tina's brother, Nick Jr., doesn't want to be the next Santa.
Looks like it's up to Tina to save Christmas!

Holiday stories really aren't the same as they used to be. They're better! The Daughter Claus by D. Thrush is a pure holiday delight, whether you celebrate Christmas or just want to be entertained during the holiday season.
The story is thoughtful and inspiring, about family, passion, determination, girl power and following your dreams.
The characters aren't very run of the mill, despite the fame of some of them. Santa isn't so jolly, instead he's a workaholic who never spent enough time with his kids. Mrs. Claus is a health nut. Their kids are a Goth musician and a brainy business major. The reindeer are demanding and rude (and Rudolph likes to sing karaoke while drunk). The elves are part of a union. Christmas is a business, not a jolly fun time.
The characters unique to the story, the Claus kids, the boy-crazy counselor Lisa, North Pole foreman Walter, and the handsome musician George, are perfect for the story, giving its originality a deeper level.
The family dynamics are similar to what many people deal with: an ailing father with reluctant heirs, the son who refuses to have anything to do with the business, the daughter who feels neglected because she's a girl, and the wife desperately trying to hold her family together.
I think a lot of people will see themselves and others they know in them.
The story is not a typical happy Christmas story, but it's uplifting and inspiring. Tina is a spitfire with a great head on her shoulders, and just reading this brings me back to being five or six, watching old Christmas cartoons and thinking how magical that time of year was.
Please treat yourself (or someone else) this holiday season. Buy The Daughter Claus!


Purchase The Daughter Claus via: 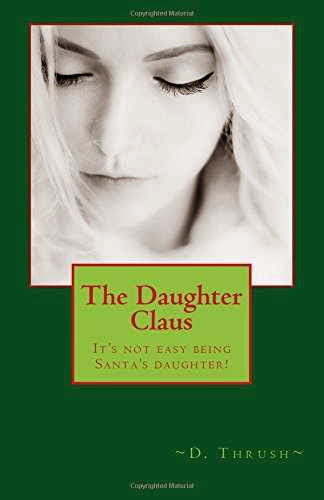 Posted by Kelly Smith Reviews at 10:16 AM