While I'm more used to short story collections having five or more tales, Unsavory Delicacies by Russell Brooks doesn't need more than the three he included to be worth your time and money.
It begins with an ex-Mossad agent about to assassinate a man giving her sensitive information and ends with the same man infiltrating a Russian Mafioso's club and finding a strange surprise. In the middle, you have a disturbing story about a chef who avenges his honor on the food critic who cost him his job once before.

Revenge. Espionage. Death. What more do you need for a half-hour's worth of entertainment? The stories are well-written and very well planned out. They're actually little unsavory delicacies in themselves! Like I said, they're eerily disturbing, like Rod Serling could have written them.
There are no monsters, there's no sex, nothing that people think they need to incorporate into their work. It's parts humanity in its most animalistic forms: self-preservation, vengeful and secretive.
A great read! 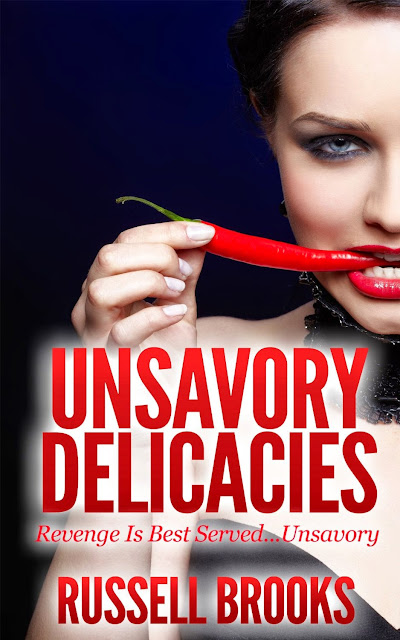 Posted by Kelly Smith Reviews at 11:00 AM