TRUE COLORS is about an eighth grader named Landry Albright who just wants to be one of the interesting girls at school who always have exciting things happening in their lives. She wants to stand out, but also wants to fit in, too. So she gives in when her friends push her into trying out for a teen reality show modeling competition with them. Landry goes in nervous, but impresses the judges enough to make it to the next round. However, her friends get cut and basically "unfriend" her on Monday at school. Landry tries to make new friends, but gets caught up between wanting to be herself and conforming to who her new friends want her to be. Along the way she learns that modeling is nowhere as glamorous as it seems, how to deal with frenemies, a new crush, and that true friends see you for who you really are and like you because of it.

High school. Stephen King said, “I hated high school. I don’t trust anybody who looks back on the years from 14 to 18 with any enjoyment. If you liked being a teenager, there’s something wrong with you.” That quote could be Landry in the future.
True Colors is the story of how awful high school is, and how even the popular kids are made to feel unwanted. Think Mean Girls without the sex. Landry could have been any of us at that age: shy, wanting to be popular and being the victim of bullies whom she thought were her friends. It's a story of how, even when you're a good person, others will still find a way to cut you down.
Character-wise, everyone is as expected in this genre: Landry is a sweet, slightly pitiable main character whom you want to hug. Her "friends" are so detestable you want to pull their hair. And in between them you have characters to wonder about: who will be good for Landry? Who will eventually hurt her?
Ms. Hager wrote plainly and realistically, telling us about these kids who could be our neighbors. It will take you on a rollercoaster ride of emotions and leave you ecstatic for the sequel.
Everyone over the age of twelve needs to read True Colors!

Official site (has links to all sellers worldwide) 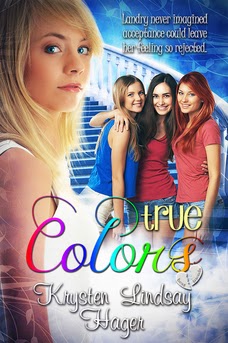