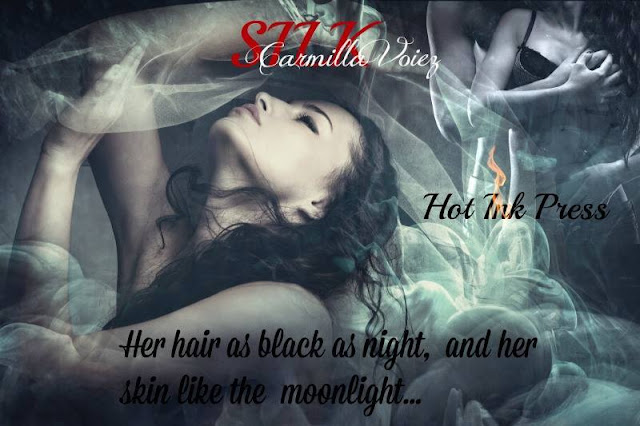 An excerpt from Silk - http://smarturl.it/SilkErotica
She tasted of honey, salt and red berries. He sucked her breath greedily into his lungs as his tongue explored her open mouth. The dance of tongue against tongue and the pressing together of lips and teeth made him ravenous. He swept her up in his arms and carried her to the bedroom.
She giggled as he juggled her in one arm while sweeping the quilt clean of gifts. Shoes, perfume bottles and mirror clattered to the floor. He placed her at the centre. Selkie surrounded by mulberry silk. He smiled and kissed her throat. Her pulse fluttered against his lips. He moved downwards, pulling her breasts into his eager mouth, in turn. Her nipples hardened and stabbed at the air. He licked their tips and watched the soft flesh of her breasts ripple in response.
She tangled her fingers in his hair, encouraging his exploration of her. He traced her stomach with kisses and paused as he reached her pelvis. The smell of her was much richer, far more vibrant, here. She smelled warm and welcoming, sweet and spicy. He savoured her wondrous aroma and turned his eyes to her face. Her pupils were dark tunnels in the midst of blue waters. They dragged his soul from his body and he floated joyfully towards her until she broke the spell, pushing against the back of his skull until his nose rested on her clit and his lips surrounded her labia.

An excerpt from Jack and the Beanstalk ¨C http://smarturl.it/SilkErotica

‘Viagra?’ I asked.
He held the bottle towards me. ‘Sort of, it’s a new product. I bought it from a friend in China. It’s supposed to be incredible, like magic.’
‘You haven’t tried it before?’
‘I haven’t met anyone as beautiful as you for a long time,’ he answered.
I almost felt sorry for him until I remembered that he was the sort of wealthy Capitalist pig whose needs always outweighed the rest of ours. I decided to try to steal his watch as well if I got the chance.
‘If it’s your first time should you really take two?’ I frowned. The last thing I wanted was some old man having a heart attack mid thrust.
‘Forgive me if I want to make this a night to remember, for both of us.’ He winked and swallowed the pills.
I smiled and nodded and started to unbutton my blouse.
‘Please, let me,’ he said.
He crawled across the bed towards me. His eyes looked wild. He reminded me of a snow tiger with his shades of white and grey. I wasn’t sure whether to laugh at his comical efforts of eroticism or be turned on by his predatory stare. I kept my mouth closed and felt my panties grow damp. Enjoy your job when you can, that was my motto.
I leaned across the bed towards him and kissed his mouth hard. He grabbed my hair and held my face close to his, filling my mouth with his tongue. This close, with my vision blurred, he reminded me of Richard Gere. Hollywood inspired fantasies filled my head. I allowed myself to dream that I was the Pretty Woman and he would rescue my father and me from our distress, but I was too old for fairy tales. I would never be the heroine, always the villain.
He unbuttoned my blouse without breaking the kiss. Braless, my young nipples reached out towards him. He cupped them in his soft hands. His skin was like silk. I thought of the boys I had fucked before and how rough their skin had been in comparison. Their hands had worked for a living. I could only imagine how this man made his money. Yet in spite of my Class War spirit of defiance I enjoyed the way he stroked my nipples. The supple skin of his thumbs and fingers glided across my breasts. The embrace felt like a dream. If I allowed myself to yearn it would be for a man like this, a prince who could kiss me and transform me into his princess.
He filled his mouth with my left nipple and started work unzipping my skirt. His hands cupped the cheeks of my ass. My temperature rose. I wanted to be free of my clothes. I wanted to ride this man until he passed out from exhaustion. Then my work would begin. 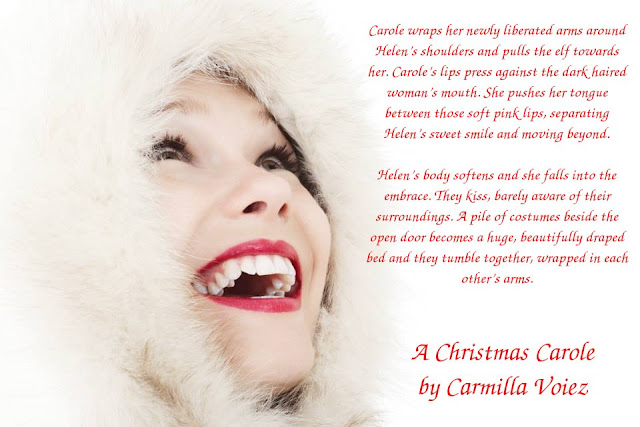 An excerpt from A Christmas Carole  - http://smarturl.it/AChristmasCarole.
Carole sighs again when she sees the length of the queue.
‘Isn’t Santa a bit busy? Maybe we should come back later?’
‘No,’ Amy says. Her eyes mirror the stubbornness of Carole’s sister when they were children. ‘I don’t mind waiting.’

Child and aunt step forward as more eager children and bored-looking guardians join the queue behind them. Another eternity, a hundred more baby steps forward and they push through a curtain of foil to the grotto. A jangling rendition of “Jingle Bells” fills the space. Plaster of Paris elves wrap gifts and fairy lights twinkle above like stars. Amy gasps.
Carole smiles and gently squeezes her niece’s hand. Ahead an elf whispers to parents, adding children’s names and ages to an electronic “good list”. The elf steps closer. Above the circles of rouge on the woman’s heart- shaped face are soft brown eyes with heavy lashes. Her short black hair is tucked behind prosthetic ears, but it is her smile which makes Carole’s heart beat faster. 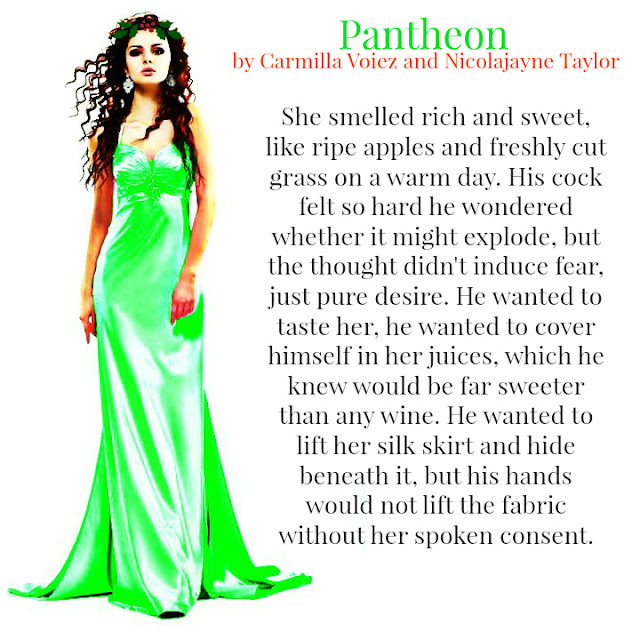 An excerpt from Pantheon ¨C http://smarturl.it/PantheonErotica

She smiled and kissed his lips. He was lost. He gripped her body tightly, feeling the soft swell of her breasts and stomach against him. He covered her mouth, face and throat with hungry kisses then sank, slowly, to his knees before her. Tracing her breasts with his tongue as he descended.

Her laugh was musical and her eyes full of humour. 'You do not need to kneel before me.'

But his worship was far from complete. He moulded his hands against the contours of her waist and hips before he let them rest on her ample buttocks. His heart quickened and he moved them again, around and around, caressing her ass while gazing at her beautiful face, beyond the peaks of her hard nipples and full breasts. Crysta's appeal paled in the face of this supernatural beauty. The secretary's rejection amused him as he pressed his face against this goddess's pelvis and felt the warm, welcoming throb of her sex against his nose. She smelled rich and sweet, like ripe apples and freshly cut grass on a warm day. His cock felt so hard he wondered whether it might explode, but the thought didn't induce fear, just pure desire. He wanted to taste her, he wanted to cover himself in her juices, which he knew would be far sweeter than any wine. He wanted to lift her silk skirt and hide beneath it, but his hands would not lift the fabric without her spoken consent. 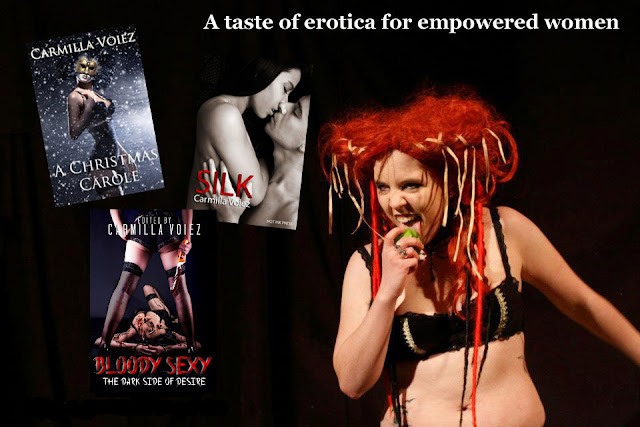