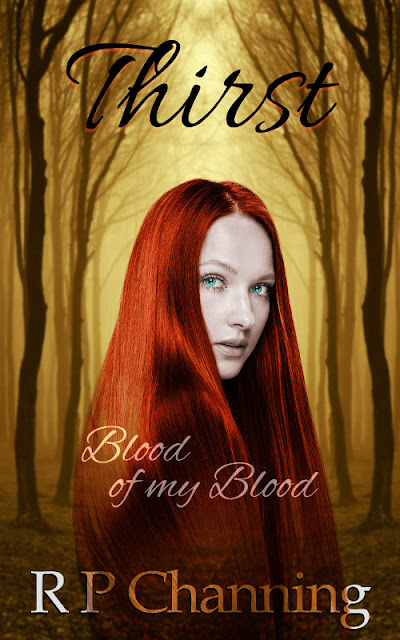 After a near fatal accident (and getting cheated on by her 'boyfriend'), and beating up the lead cheerleader (with whom the boyfriend cheated...), and being labeled as having 'issues' in her school because she, uhm, sees ghosts, Kira is left with two choices:

1. Continue her 'therapy' (where she's told the ghost is a hallucination and also gets her legs ogled too often...)

2. Go to Starkfield Academy, a boarding school for "Crazies and Convicts" (as the social media sites call them.)


She chooses the latter...

Cory Rand has not had an easy life. His mother died in a car accident when he was twelve, and so did his mother's best friend...sort of. You see, Janice made a promise to take care of Cory just before she died, and so she lingers. Undead. A ghost that watches out for him.

Brought up in an abusive home, Cory quickly falls into a life of disreputable behavior. After his third offense (which was prompted by a girl, as usual - he has a weakness) he's left with two choices:

1. Be tried as an adult and share a cell with a guy named Bubba (he thinks...)

2. Go to Starkfield Academy, which Cory is pretty sure is run by vampires. But, hey, at least he'll get an education.

He chooses the latter...

It's at Starkfield that Kira meets Cory Rand, a boy with an insatiable Rage who sees ghosts, too. As well as other things, other things from his past, things that confuse him, things like fire and witches and demons.

Author Bio
R P Channing started writing three years ago, but never published anything even after churning out over a million words of fiction. Thirst: Blood of my Blood is the first book he dared to publish. When asked why, he said, “Because it’s the first thing I wrote that my wife actually enjoyed reading.” When not hammering away (most literally) at his keyboard, he can be found buried in a book, reading anything from romance to horror to young adult to non-fiction to comedy.

My life was perfect.
I had the perfect shoes and the perfect friends and I lived in the perfect house. My nails were perfect and my hair was perfect (except on Sundays, it was always windy on Sundays) and I had the perfect clothes. My lips were a perfect red and my hair perfectly straight. My eyeshadow was perfect, my hips were...okay, and my waist...well...also okay. Nothing was wrong in my life.
But then there was Jack.
Jack was a problem.
He needed to go. I mean, when you’re dead, you’re dead! I had told him this endlessly. Somehow, Jack didn’t get it. I mean, I felt sorry for the guy. Sure. Being stuck between this life and the next. But just because I found him, does that mean I needed to keep him?
I think not!
Sadly, when Jack got that look in his eyes, that weary, almost teary (if his tear-ducts worked) look, I melted. I just couldn’t send him away. Not even Jack knew where he would go after he died.
Would he, like, die? As in — dead, nada, kaput, finito, gone, no more? Bye bye, sayonara, ciao, hasta la vista baby and all that?
I couldn’t have that on my conscience. No way.
I lay on my bed, wondering what to do about him. “Jaaaaaaack,” I hollered.
“Jaaaaaaack!”
Still no answer.
“Jack!”
Jack...materialized.
His eyes rolled down to the ground. He was making those puppy eyes again. “Jack, I told you not to do that. I told you not to play on my sympathies.”
His puppy eyes became worse.
His skin was gray and, well, dead.
“Oh, brother,” I said. “I have to do something about you. If mom finds out I have another ‘imaginary friend’ — at my age — well, I’d die of embarrassment. But, like, really die. Not like you.” I wondered about this. Would I die? Was Jack a freak accident, or did all people live on like him? Think of the cemeteries...
The idea excited me somewhat.
“What would you have me do, Miss Kira?”
“Knock off the Miss Kira crap. I told you it’s just Kira.”
“Yes, Miss Kira.”
The dead. There’s just no reasoning.
“Fine, Miss Kira it is then.” Rover barked like a lunatic in the garden. No one else might be able to see Jack, but I was sure my dog could.
“I have to do something about this,” I mumbled.

Mike knocked on the door before I had time to leave the house. Mike was the guy I thought (at the time) was perfect.
“Who is it?”
“It’s me, baby.”
Baby, urgh — I wasn’t his baby. I dated Mike because he was the quarterback, because girls are supposed to like the quarterback, because it’s just so darn perfect to be seen with the quarterback, like we’re brainwashed into thinking these things from the first romantic doll set mom buys us.
This was my previous life.
“Mike.”
“Uh-huh. Gonna let me in?”
So you can try rub me up and then complain when I don’t let you? This, dear reader, was the big problem with Mike. The second we first kissed, his hand went way too far south for me to be comfortable — and I pulled back.
Mike suddenly wasn’t so perfect.
“Uhm, I was just on my way out,” I said.
“Kira? C’mon, open the door.” He sounded upset. “Is there someone in there with you?”
Boys. As if.
I didn’t know much about love (nothing, actually) but I knew this wasn’t it.
“Uhm, now’s not the time, Mike.”
“C’mon, Kira, what’s going on?” He banged harder.
When in doubt...lie. I opened the door a crack. “There’s a dead rat in the house, Mike. Been here for days. I gotta go get some detergent and stuff to handle the stench.”
Mike stepped back. He peered through the crack of the door.
“It’s really bad,” I said.
“I’ll drive you.”
“I’m afraid the smell” — I stuck my armpit to my nose — “has found its way all over me. I’ll drive myself.”
“O — okay. Fine.” And then he grinned like he wanted something. “Later? My place?”
Urgh. “Uhm, sure...er...later. Not sure when though.”
“Six.”
I fought the urge to roll my eyes. According to girls at school, he was apparently so damn good looking — theoretically. But for me personally, he did nothing. Moved nothing. Twisted nothing. “Look, I gotta go, Mike. I gotta — ”
“Kira.” His eyes grew stern. “You’ve been avoiding me...”
Bingo! Well done contestant number one! And what have you won? A brain!
I tilted my head. “Mike, look, this...rat — I need to deal with it. We’ll talk later, okay? Bye.” I closed the door, not waiting for an answer, and peered out the peep hole. Mike hung around for a second, shoulders wide and eyes glaring straight at me through the door. Could he see me? Did he know I was looking at him?
He kicked something off the ground, and I had the distinct impression he mouthed the word Bitch before leaving. But I wasn’t sure...

“Roll down the window, Jack.” Jack was recently dead, so he still had a smell about him. (Which only I could smell...)
I had purposely skipped breakfast. Maybe Jack would help me lose weight. I was (still am) a little wide, although it had never stopped guys flirting with me. I know how to dress.
But I could be skinnier.
Lucy Rogers was skinny. All bones and no boobs.
Charlene Carverton was a babe. Cheerleader. Big chest (which she pushed out generously with a push-up — if only guys knew). Toned thighs. Charlene only dated college boys (back then), which I still think is pretty gross for a girl her age.
“He’s not for you,” Jack said out the blue.
“Hmm?”
“This...Mike — he’s wrong for you, Miss Kira.” For all Jack’s faults (mainly, being dead), he has a good heart. Factually, probably it’s why I kept him around at first.
“You think I don’t know that?”
“Then why don’t you dump him?”
I braked at a stop sign. Looked left and right. “Because I’d look like an idiot. I flirted with him and showed interest, and one kiss later I can’t stand the sight of him.”
“So dump him.”
“It’s not that simple. Kids at school — they can be vicious. I have to let it fade slowly. If I drop the bomb on him, I’ll never hear the end of it through senior year.”
“And you care?”
Yes, I did. Forget Guantanamo, schools are rough. “You don’t understand, Jack. Maybe school was different in your day. But in mine, well, we walk through metal detectors.”
“Schools weren’t too different in my day.” I noted the sadness in his voice.
“You okay?”
“I’m dead.”
Right. “You miss...your life?”
Jack shrugged. “I like being with you, Miss Kira. And I don’t remember much of my life. I think I’m in limbo.”
“Limbo?”
“Yes, like I have some unfinished business. If only I could remember...what...it is...” He scratched his head.
“Any ideas?”
“Well, it can’t be love. If it were love, I’d be a vampire. That’s who teenage girls fall in love with these days.”
“A vampire? That’s just what I need — two undead beings stalking me.”
“I feel I have something to do around you, Miss Kira. I don’t know what, but something. Something important.”
I looked over at him. “Me?”
I was still looking at him when I missed the stop sign.
The Mack truck drove straight into us.
Posted by Unknown at 11:21 PM