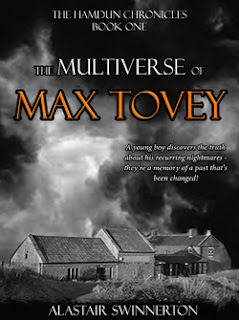 Fourteen-year-old Max Tovey’s world is blown apart when he discovers that his problems are nothing to do with him, and everything to do with being a Time Traveller. Following his mysterious grandfather’s funeral, Max finds himself on a wild journey through first century Celtic Britain, real and mythological, as his every action threatens to change the past, and his future.Max battles demons – both real and psychological – on his mission to find the legendary Montacute Cross, stolen by his Viking ancestor Tofig, in order to close the gates to the Underworld, and lift the curse on his family.

I received an advance copy of this book from the publisher in exchange for an honest review.

For a YA novel, I was pleasantly surprised by the depth this book had. I was reminded of Hitchhiker's Guide To The Galaxy, but with a deeper meaning behind the narrative.
Time travel, sci-fi, fantasy and a little psychological drama mix together to give kids (and adults) a wild ride through ancient Britain, where we meet Vikings, gods and...the Devil? The Underworld plays a surprising part in the story, as does an ancient curse.
I love the mixing genres, but there were times when history, sci-fi and fantasy mixed too much, making certain parts of the book just a little too unbelievable. I had a lot of fun reading it, and I know others will, too. I just think it could've done with a little less melding of different styles.
This book was great, overall. Fun, a little dark, and I would buy it for every kid I know if I could!

Purchase The Multiverse of Max Tovey on August 31st via Eurpoean Geeks.
Posted by Kelly Smith Reviews at 6:30 AM