BOOK REVIEW/AUTHOR INTERVIEW: The Commons Book One: The Journeyman" by Michael Alan Peck

Paul Reid is essentially a street kid, drifting here and there and now on a real mission: to find out who his father is.
On the way from New York City to San Francisco, he meets war veteran Annie and her autistic son, Zach. While on the trip, the bus crashes and nearly everyone dies. Those who don't are killed on sight by strange men in black riot gear. Except for Paul, who is sent to The Commons, a place like Purgatory, where he goes on a Journey (accompanied by some unique folks from the real world and the fantasy realm) to see of he can stop a corporate bigwig from taking over The Commons and free the dead.

Michael Alan Peck is a name you NEED to remember! <em>The Commons Book 1: The Journeyman</em> isn't just a fun read, it is all-encompassing, drawing you into its world as easily as Stephen King can.
It's not so much the characters, though there are certainly some standouts in the vast cast, or even the plot, but the unique voice behind the novel.
Try as I might, I cannot compare this to anything I've read lately. It is in a league of its own.
For older teens and adults of all ages, it's an epic fantasy adventure with horror and metaphysical undertones. You will not want the book to end!

It’s not so much that I decided to become a writer as it is that I recognized that I already was one—and I was lucky enough to begin realizing that early on. Third grade, specifically, when I was just heading into an academic transition from a student who actually tried to get good grades to a ne’er-do-well who couldn’t be bothered to commit  himself at all. But I always tried very hard when assigned a short story of any kind.
When I moved to fourth grade—despite my best efforts, they insisted on advancing me—my third-grade teacher kept giving me story-writing assignments because she thought I was pretty good and wanted to encourage me. I liked her and didn’t want to let her down.
In fifth grade, I had a substitute teacher for a week—a retired old-school knuckle-whacker who didn’t put up with nonsense from brats like me. I had a crush on a girl in my class, which meant, of course, that I had to be as awful as possible to her. When this substitute told us to write a story about something we liked to do with friends, I penned a tale of how we defended the world against an evil population of girls who all shared the name of the poor girl I had the crush on. We battled them with various kinds of weaponry—laser pistols, missile launchers, bombs, energy beams, and anything else I’d seen used on Ultra Man and other Japanese-import TV.
The substitute teacher was completely freaked out by my story. She gave me a mediocre grade (I got points for vocabulary), and her notes included some terms I had to look up. When I found out what “juvenile delinquent” meant, I took it as a compliment. And I then understood the power of the written word and how it could move the reader. I was hooked.

One of the first authors I remember being taken with was E.B. White. Charlotte’s Web was a revelation. But what really convinced me that books could be as good or better than TV and cartoons was when a friend told me about Mollie Hunter’s The Haunted Mountain. That’s when I really felt the magic of reading.
My favorite books today range from Gabriel García Márquez’s One Hundred Years of Solitude, Larry McMurtry’s Lonesome Dove and Dickens’s A Tale of Two Cities to Vonnegut’s Slaughterhouse-Five, Bradbury’s Fahrenheit 451, and Neil Gaiman’s Sandman comics. I think that a good story isn’t limited to any genre. Magic doesn’t chain itself to one shelf or another.

3. What was the inspiration behind your novel The Commons Book 1: The Journeyman?

I recently attended a memorial service I knew was going to be wrenching. A co-worker gave me a ride there, and when we pulled into the parking lot, we spent a few minutes just sitting in the car, trying to prepare ourselves to enter the church.
“I’m not good with death,” she told me. “I’m just warning you.”
“Neither am I,” I said.
And that’s true. And it’s a large part of why I created The Commons as a world to contain these characters and stories to come, I think. I’ve always been angry at the fact that good experiences must end, and good people have to go away.
What if they didn’t? What if the people and their imaginings continued? I played around with that idea, mixed in a desire to see the downtrodden and ignored given the chance to be recognized and make a difference, and suddenly I had a world I could populate with stories and characters for as long as I could make them up.
There’s a reason I’ve affixed the number one prominently to the Journeyman title: this is just the beginning.

4. How many books will this series span?

Initially, it’s a planned trilogy that will establish the relationship between The Commons and our world. From there, I don’t see an end. My goal is to build a realm where I can do everything from series to standalone novels, short stories, graphic novels—you name it.

5. What would you do of you were in Paul's position?

I think I’d do much the same as Paul, at least for starters. There’s no denying that Paul is part of me. Or part of him is, at least, just as Porter, Annie, and Zach are. And just as Truitt and Brill are, though I’m loathe to admit that since it reveals a not very nice part of me that I think exists in everyone.
But I digress. I like to think I’d come from as noble a place as Paul does, but I’m guessing that I’d probably be more skeptical than he is. I’d probably spend a lot more time trying to figure out if Porter really is one of the good guys and whether he’s trying to scam me or not. I think Paul is more willing than I am to trust, to act, and then see what the outcome is. I can often be more of a wait-and-see type.

6. Will we see new characters come into play as the series goes on or will it continue to center around the ones you introduced here?

There will be many new characters introduced, and the current ones will resurface and continue to play a part, as well. My mental model for the world of The Commons is a fiction version of the Marvel Comics Universe. Major characters in one story become minor characters in another and vice versa. InThe Journeyman, the porcupine man with a typewriter and the truck-driving slot machine man are only momentary figures. But that doesn’t mean we won’t see them again.

I don’t think I have to choose, which is why I love the ebook revolution so much. When you’re talking print books in a physical bookstore, your book tends to live on one shelf in one section. I refer to The Journeyman as contemporary or urban fantasy. But it has elements of literary fiction, and reviewers have called it metaphysical fiction, magical realism, and slipstream. After a point, the distinctions melt away, and you don’t have to worry about being pigeonholed. For now, genre is a bit of a marketing limitation. But that doesn’t have to hold true over the long haul.

8. What is your personal belief about the afterlife?

I firmly believe that I have no clue—and that the more insistent someone else is about their knowledge, the more sure I am that they don’t know, either. Which is fine. Everyone is free to believe whatever they want. But the only thing that makes sense to me is some sort of cyclical energy in the universe—Essence, in my book—that may carry on as the discrete form of you or may be broken up and redistributed. Everything else in the world works that way, so to me, it only seems to follow. That said, I’ll repeat: I don’t believe that’s the case. It just feels more sensible to me than any other model with which I’ve been presented. So I run with it in my fiction.

9. Where did you get the idea for the many strange characters in The Commons (the one that sticks out in my mind the most is the half-man/half-slot machine)?

I needed beings to help illustrate the depth of the randomness and creative energy in The Commons. What does a world look like when it’s populated by stray memories and fragments of creation? Luckily, I’m an odd person. Whenever I needed to come up with strange things and creatures to see, they came to me. I think they patiently wait outside the door. When I turn its knob and open it, they dance on in.

I think the most interesting cast would be one of fresh or less familiar faces. The tendency is to go for well-known actors, as I’m doing above, but it would be intriguing to see a mix of mostly new people and character-actor veterans without a lot of top-billing exposure, as HBO had in shows such as The Wire, Deadwood, and The Sopranos.

I can tell you where I’d love to be: a half-dozen Commons books under my belt, all of them as well received as The Journeyman has been, and the ability to write full-time. That really is the dream. Whether I’ll get there or not isn’t entirely up to me, of course, but I can help it along with a bit more discipline.

That’s easy. I’d be deeply depressed and cranky. Ask me how I know.

Book 2 in the Commons trilogy. It’ll be called The Margins.

I have an old-fashioned flip-phone, which is never on, and I rely on an old-school land line, which I rarely answer.
I used to write about TV for a living, but I avoid watching it to the point where I don’t recognize most of the names on the magazine covers I see in the grocery store.
In college, Raymond Carver once helped me with a poem I’d written. He advised cutting the first stanza—and, not surprisingly, he was right. He was, after all, Raymond Carver. 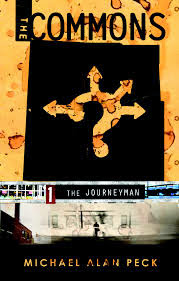 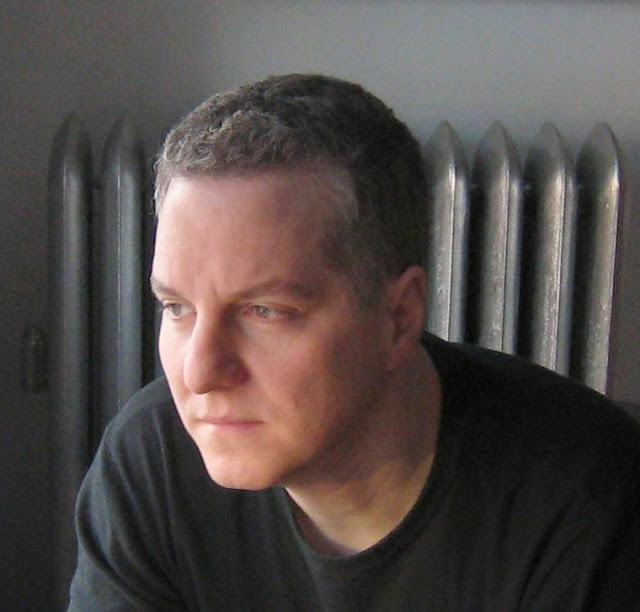