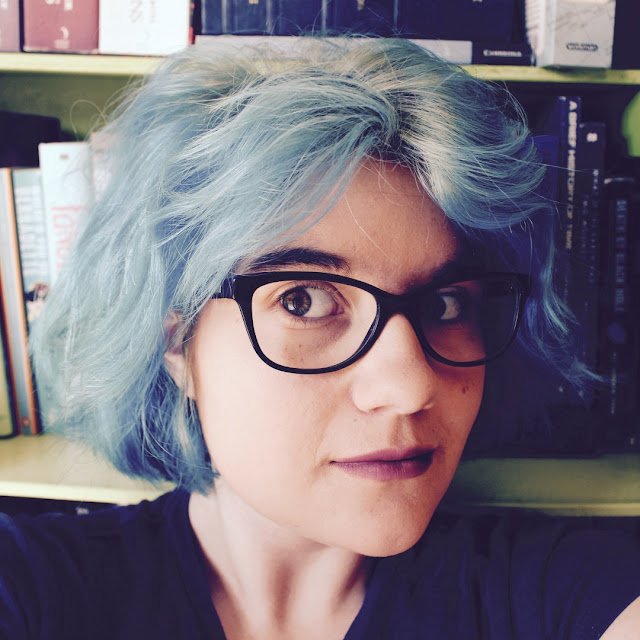 1. When/why did you decide to become a writer? *

I don't think I ever 'decided', I just always knew I wanted to tell stories. I've been telling them since I learned how to talk!

2. What authors inspired you when you were younger? What books do you enjoy reading today? *

J.K. Rowling, Douglas Adams, Neil Gaiman... their books shaped the way I read, and now, write. These days I'm still into Science Fiction, but I'm challenging myself to read non-fiction to broaden my horizons.

3. What was the inspiration behind your latest release? *

Alienation (October 24th 2017) was, at first, just a novel about a stratified society where "moving up in the world" was quite literal. The first draft was written 7 years ago, before I had the tools to really talk about social mobility. Finding it too dark, I used the character of Sally Webber to explore the absurd aspects of a world not so different from our own!

4. Were any of the characters personalities or emotions taken from real life? *

Not from people I know, but from real struggles, sure. Sally Webber deals with anxiety and depression, but it does not define her life.

5. Why do you write in your chosen genre? What other genres would you like to try your hand at? *

I write scifi because I LOVE scifi. I'm actually getting a masters in Astrophysics! But I would love to write fantasy, or contemporary lit, too.

6. What would you do if you were your main character? *

Probably freak out and explore the universe. She's got such an exciting opportunity to see space up close!

7. Will we ever see these characters again? *

8. Would you like to see this book as a film or TV show? If yes, who do you want to see play your characters? *

I think it would be amazing for Starstruck to be a TV show! Sally could be played by Britt Robertson, Zander by Rohit Khandelwal, and Blayde by Summer Glau (if she's be willing to dye her hair!).

9. Where do you see yourself and your career in the next ten years?

Hopefully with a bestselling series and a show! I would love to balance both my writing career and research into astrophysics and cosmology.

10. Is there anything you haven't touched on that you'd like readers to know about your book? *

It's exciting, it's funny, and it answers the question of whether or not we're ready for space tourism. Oh! And there's pizza!

Well, I have quite a few projects in the works. I'm working on the next Starstruck book (Traveler, coming spring 2018) but also a YA scifi which I'm really excited about. No spoilers!

13. What authors, dead or alive, would you like to collaborate with? *

14. What are three things that may surprise your readers to know about you? *

I mapped the surface of Mercury, have a cover design business, and can sing the periodic table song. Hi!

15. Please list your links where readers can find you online and purchase your works. *

My rock, my savior, my prince. You found me when I was lost
What inspired Piper & TL to write Battered & Bruised, but not broken
I think our budding friendship and differences in our lives which is the same thing that drew us together. Piper's character is tormented and has been to hell and back. TL's character is someone who's suffered, but still managed to move past his anguish, or so he thought.

Where in the hell did I get that prissy, little take charge, bitch attitude from? That’s so not like me, I’m actually quite the opposite. Yet every time I’m around Hunter I turn into a fucking queen. But the way he freaked when I told him I was a virgin sent me into fight or flight mode and I’ll be damned if I’m going to let him or his ‘my shit don’t stink’ attitude get the best of me. Tell me I can come and go as I please, it’s like ‘no fucking shit I can’, but right now, all I want to do is lose my virginity to this cocky man. Why him? I honestly don’t know, but twenty-three years of waiting can make a guy do crazy shit. I know he wants me, it’s written all over his smug face. I see him grin when he thinks I’m looking the other direction. There’s a reason our paths keep crossing, call it karma, call it kismet, hell, call it whatever the fuck you want, but I know damn good and well there’s a reason for it. But last night, I saw a glimpse of his gentle side— the side that calls me to him when I shivered while he was undressing me. As I lay here watching him sleep, I see so much more in him than he does. I see the gentler, need to be loved side that he desperately tries to hide behind his tattooed bad boy façade. But what makes him tick? Baggage he claims, fuck dude, we all have baggage. Try getting past a homophobic father who damn near beats you to death when he finds out you’re gay. Talk about baggage, I never let anyone in after that. Fuck, it’d been years before I even tried to so much as kiss anyone after that. Hook-ups were my chosen vice in college, but I never let anyone in. And lo and behold what happens the first time I do? I get my dick sucked by the most amazing man I’ve ever met. The same man laying here beside me sleeping. The same man who’s quickly winning my heart. I was so nervous last night when he undressed me, so afraid he’d reject me in my vulnerable state of nakedness. My body still bears the physical scars from my father’s abuse which I thought would turn him off. But he looked right past them as though they didn’t exist. And when he called me baby, I lost it. A term of endearment from a self-proclaimed bad boy. That alone shows the depths of his humanity. I know the real Hunter’s in there, now all I need to do is prove to him that I won’t hurt him because clearly, something in his past has seriously fucked him up.

Piper Kay is your average cup of tea with a splash of southern sass. She was born & raised in Houston, Texas-USA and her skills include pitching a fit and throwing a hissy. She also happens to be an author….with a bi-polar muse…who may or may not have sarcastic tendencies….and/or a potty mouth. Together, they share head space w/the men living in there… her boys with baditude. Piper is an Amazon #1 International Best Selling author of LGBT Erotica, and an Amazon International Bestselling author of LGBT Erotica romance, specifically in the M/M Erotica genre, and LGBT drama. She has been known to genre hop a time or two into YA/NA stories, also M/M. Piper brings her passion of storytelling straight to the pages, most times served with a super-sized sprinkle of sexy, a slice of sarcasm and a carafe of crazy. Piper can be reached at Amazon author page: http://amazon.com/author/piperkay FB: https://www.facebook.com/piper.kay.1 About me: http://about.me/piper.kay Twitter: https://twitter.com/PiperKayAuthor Goodreads: https://www.goodreads.com/author/show/6613775.Piper_Kay Authograph: https://www.authorgraph.com/authors/PiperKayAuthor Google: https://google.com/+PiperKay Blog: www.piperkayauthor.com Youtube: https://www.youtube.com/channel/UChQcM-y0AvDtn6YO9PY7lxg Instagram: http://instagram.com/piperkay.author TL Travis is the published author of The Sebastian Chronicles, The Database, and Hat Trick along with numerous other erotic musings (and many more in the works), The Elders Trilogy – an erotic paranormal (Vampire) romance novel series and many non-fiction articles. In her spare time she likes to fish, enjoy all the Pacific Northwest has to offer, spin spicy erotic webs for readers to enjoy, and rescue any 4 legged lost souls she comes across. Since her children are grown and have flown the coop, she’s taken to spoiling her two deaf white boxers even more so than they were before. And as always please remember – adopt a pet, don’t shop. Saving that life might just save yours. To learn more about TL Travis and her stories, visit her website http://www.tltravis.com/ ❤ Give TL Travis Author Facebook Page a like https://www.facebook.com/tltravisauthor ❤ Follow TL Travis on Twitter: http://www.twitter.com/tltravis1 Other Social Media Accounts http://www.goodreads.com/goodreadscomtltravis http://amazon.com/author/tltravis http://www.authorgraph.com/authors/tltravis1 http://about.me/tltravis http://about.me/tltravis

I have read both Piper and TL's work before, and I'm a fan of both authors. Finding out they were writing a book together got two reactions out of me: excitement and a sense of "what the f*** are we getting into here?"
What we got into is a whirlwind novel about two disparate yet equally damaged young men who both experienced the crushing blows of homophobia from their family, as well as a lot of abuse.
Hunter is an ex-con who has trust issues. Elliott is a nerdy man with a whole different set of issues. When they meet, without even knowing the others' name, it's lust at first sight.
Now, I know the insta-lust trope puts some readers off, but please believe me that their emotions at their first meeting are integral to the plot. Don't be put off by it; it means much more than a hook up to start the book hot.
And the book IS hot. So hot. It starts with a teaser of Hunter's past and goes right into a hot oral scene in the back room of a gay nightclub, and the ball gets rolling from there. Chapter one tells you right off the bat what to expect: angst, hot men, and sex. It sounds so simple, but the emotions captured and the issues touched on go much deeper.
These are complex characters in an age-old love story: star-crossed lovers, emotional issues, and pushing the other away. You'll be swooning, fanning yourself, and falling in love with them: not in a romantic way, but in that special way that a reader falls for a fictional character that means so much.
They leap off the page and into your heart as these women put so much hard work into creating them. You might call both Hunter and Elliott AND Piper and TL a match made in Heaven.

Posted by Unknown at 4:20 AM No comments: