BY ROSEMARY A JOHNS

Vampires and angels are locked in a deadly war. But first, they want their daughter back.

Half vampire/half angel, Violet, was abandoned amongst the humans in London as a baby. Suddenly discovering monstrous powers on her twenty-first birthday, she thinks she’s the most dangerous creature to prowl the streets.

When a snarky angel falls into her lap and her adopted sister disappears, Violet is forced into a new role: Huntress. But the deeper she’s dragged into this supernatural world, the more she struggles to survive.

On the run, Violet’ll have to rely on a sexy vampire geek, while facing off the harem boy angel threatening her sister. And there’s only one way she’ll win: by letting out the monster...

This party will be taking place on May 26, 2018 in the Author Friends With Benefits Group. Be there, you won't wanna miss this! For now, invite your friends to the large link above and we’ll make sure everyone knows how to request a join to the group. It's so exciting! Have you seen this lineup? A plethora of different genres with their own games and possible prizes!

Vampires? Angels? All I know is they’re both bastards.

And I hunt bastards.

In the beginning, I made games about them. None of it was real, only play. I was human, after all, in a world of humans. At least, I reckoned so. The gamer and developer, lost in make-believe.

Until everything changed, and the monsters fell from above.

Except, they tasted of sugar and blood.

There are dark kisses that bruise your soul as well as your mouth. Kisses as soft as feathers. Light. Gentle. Kind. Whereas others blaze and burn to ash.

And then there are kisses that are a revelation.

As I drifted back towards the grey, once more out of the black, soft lips kissed mine.

The kiss didn’t bruise or burn but it was firm and possessive.

I bit hard. The bastard gasped, and the mouth pulled back. But not before a coppery sweet blood crescendo exploded; my tongue chased after heaven.

The new, fluttering forces deep within me awoke and roared at the taste, claiming Rebel. Wanting him, even if I didn’t.

How had I lost control even of myself?

Then I blinked awake.

Rebel peered down at me, concerned. He stroked my arm, as he had when I’d first awoken; I reckon it soothed him more than me.

Rebel hadn’t chained me this time, only snapped steel handcuffs around my wrists.

Maybe he was experimenting with bondage techniques.

When Rebel leaned closer, I elbowed him — oomph — in the guts. ‘Congratulations, you’ve just made my List of Asses to Kick.’

WINNER OF SILVER AWARD in the National Wishing Shelf Book Awards. ROSEMARY A JOHNS is also author of the bestselling Rebel Vampires series. ROSEMARY A JOHNS is an award-winning, #1 Amazon bestselling fantasy writer, music fanatic, and paranormal anti-hero addict. She writes sexy angels, savage vampires, and epic battles. Rosemary is also a traditionally published short story writer. She studied history at Oxford University and ran her own theatre company. She’s always been a rebel… Want to read more and stay up to date on Rosemary’s newest releases? Sign up for her *VIP* Rebel Newsletter and get a FREE novella!

Series by Rosemary A Johns
⬇

Posted by Unknown at 7:00 AM No comments: 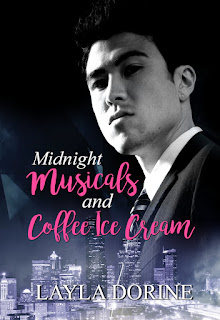 Midnight Musicals and Coffee Ice Cream by Layla Dorine
An escort and his client…could it ever be more than a business transaction.
Midnight Musicals and Coffee Ice Cream Blurb
Takashi never imagined that a simple call to an escort service would result in meeting Zander. What started out as a date to the winter gala at his office, morphed into a series of paid dates that offer him several unique opportunities to get to know the handsome, enigmatic escort.
Zander hates feeling like an ornament. After four years he’s ready for a new occupation. Unfortunately, he isn’t skilled enough for any job that would pay him the money he needs to make to support himself and his family. So, he stays with Mateo’s agency and keeps on taking clients, refusing to call them dates because that’s too personal.
Until Takashi.
Now their both trying to make the best of the brief moments they have together, blurring the lines more and more with every passing night. Takashi wants more, Zander wants to give it to him, but only after he gets the rest of his life worked out. Only problem is, he has no idea how.
Buy Links
US Amazon:  https://www.amazon.com/Midnight-Musicals-Coffee-Ice-Cream-ebook/dp/B07CZ4BQ1D
UK Amazon: https://www.amazon.co.uk/Midnight-Musicals-Coffee-Ice-Cream-ebook/dp/B07CZ4BQ1D
JP Amazon: https://www.amazon.co.jp/Midnight-Musicals-Coffee-Ice-Cream-ebook/dp/B07CZ4BQ1D
CA Amazon: https://www.amazon.ca/Midnight-Musicals-Coffee-Ice-Cream-ebook/dp/B07CZ4BQ1D
AU Amazon: https://www.amazon.com.au/Midnight-Musicals-Coffee-Ice-Cream-ebook/dp/B07CZ4BQ1D
About the Author
LAYLA DORINE lives among the sprawling prairies of Midwestern America, in a house with more cats than people. She loves hiking, fishing, swimming, martial arts, camping out, photography, cooking, and dabbling with several artistic mediums. In addition, she loves to travel and visit museums, historic, and haunted places.
Layla got hooked on writing as a child, starting with poetry and then branching out, and she hasn’t stopped writing since. Hard times, troubled times, the lives of her characters are never easy, but then what life is? The story is in the struggle, the journey, the triumphs and the falls. She writes about artists, musicians, loners, drifters, dreamers, hippies, bikers, truckers, hunters and all the other folks that she’s met and fallen in love with over the years. Sometimes she writes urban romance and sometimes its aliens crash landing near a roadside bar. When she isn’t writing, or wandering somewhere outdoors, she can often be found curled up with a good book and a kitty on her lap.
Layla Dorine can be found at:
Facebook:https://www.facebook.com/profile.php?id=100005197938547&fref=ts Twitter: https://twitter.com/layladorine
Pinterest: http://www.pinterest.com/layladorine/
Tumblr: https://layladorine.tumblr.com/
Author Website: layladorine13.wix.com/layladorineauthor
Author on Goodreads: https://www.goodreads.com/author/show/9814124.Layla_Dorine 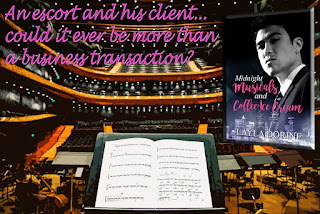 Guest Post #2
Greetings and thank you so much for hosting me and my new release Midnight Musicals and Coffee Ice Cream. One of the things that I really wanted to explore in telling Takashi’s story was the concept of time. Its easy to get so involved in something you loose track of a day. As a book lover this happens to me all the time, be it while I’m reading or while writing. I get lost in photography as well, and wandering museums, fossil hunting and almost everything else I love. But what happens when someone comes to love their work above just about everything else in their life?
With Takashi I had the opportunity to explore that. He’s a workaholic, one of the first people in and last people out of the building each night, takes his work home with him, has an almost non-existent social life made worse by the fact that in the months leading up to the story’s beginning he’s slowly been forgetting to make time for family and friends.
It’s not that he’s uncaring or disinterested in them, its simply that he’s good at what he does and rather enjoys it too, and because his last relationship ended so badly, he decided that hurling himself headlong into work would be better than actually dealing with it and trying again.
One of the saving graces of the character is his love of plays, musicals and all things theater, which sometimes is the only break he gets from his work, be it to attend in person or to sit back and indulge in a homemade pizza and video.
Pairing him with Zander helped pull back some of his layers. I enjoyed learning about some of the other things he enjoyed and watching him interact outside an office setting and I hope as readers, you will enjoy these things too and come to view him as a character with depth and substance despite his outward reservations.


Through the side characters he comes in contact with, I also looked to show different concepts of time. From his best friend, who is slowly dialing back his own work hours to make time for family, to his highly driven and creative fashion designer sister who has also come to realize that there are things to be enjoyed outside of the workroom. Add in Zander’s personal timeline for making changes in his life, and Ainsley’s ability to project plan and create in a home working environment while still taking time out to enjoy herself, and it became an interesting journey into what people do with the time they have and how they view time in the first place.
Posted by Unknown at 12:20 AM No comments:

BOOK REVIEW: "The Darker Side of Me" by S.L. Perrine 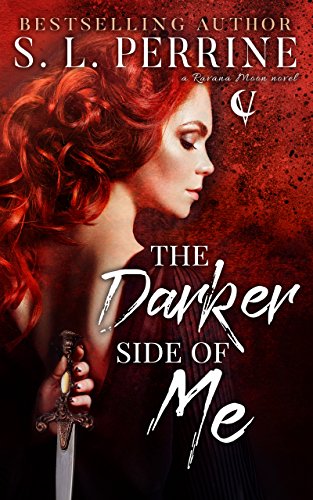 A hunter. That is what I am. I am neither alive nor dead. I cannot age. I cannot bleed for very long. I can die by another of my kind, but why would I allow such a thing? Bred to hunt things that walk amongst the humans. Things that terrify and annihilate the most fragile beings in the world. Why? I could not tell you. I only know that is how it must be. More so, because my human-self was killed, but when I woke, this is what I was.


Ravana Moon spends her existence searching for her sire, called the Ancient One. What she finds is an unsuspecting vampire completely enthralled. Her repulsion of him only makes him want her more.
When they have no choice but to team up to find their creator, they find they have more enemies to uncover.


This book is graphic in nature and contains homosexual content. It is book one in the Ravana Moon series.

I received an ARC of the book from the author in exchange for an honest review.

We're first introduced to Ravana in the anthology Damsels of Distress, and in there we can already tell these things about her world: it's sexy and full of mystery and bloodshed. The full length novel is no exception, as it brings the themes from the short to the forefront, along with a deep backstory for our heroine Ravana.
I love her character, for one thing she's not meek or simply looking for love for the entire book, despite the sexual themes in the storyline. She's searching for the vamp who created her, and along the way finds a companion vampire who will search with her.
The story was fast-paced and not so predictable that I wanted to put it down, nor was it so off point that readers who only read PNR will be turned off. It's a darker take on the genre, with a gritty heroine and intricate plot.
I can't wait to read more of Ravana's story!

Purchase The Darker Side of Me!
Posted by Unknown at 7:54 PM No comments: