BLOG TOUR/BOOK REVIEW: "The Sun, The Moon, and Maybe The Trains" by Rodney Jones

John Bartley is a teenager in the year 1875. He lives with his aunt and uncle and has a very typical life of a young man in that time. When he was younger, he found a ribbon made of a very odd material. Years later, he gets lost in that very spot. When he finds his way back to the road, it's not 1875. It's 2009. He needs to get back home, and 21st Century teenager Tess is determined to help.
What do you do when you're lost in the wrong century?

I've read over a thousand books in my life so far. I've read a few books about time travel, and none have drawn me in like this since Stephen King's Dark Tower series (though it's a vastly different story). You get to know John, his family and his time first, before you join John as his world gets turned upside down.
The characters, each and every one, no matter how brief their appearance is, are integral parts of the story. Each of them are full of originality and they all make the story that much richer.
There's a lot more going on than just an interesting plot. There's the noticeable differences between the times: electricity, cell phones, the Internet, soda, cars and television are just a few things that confuse John. Tess can't wrap her head around the fact that women in 1875 wear dresses down to their ankles, can't vote and most can't even work.
The story is also a reluctant love story. John is at the age where he needs to start courting women, and Tess is a modern American teenager. The reader knows immediately what they realize quite late, they love each other. This is a tale of love that transcends through time and space, literally.
Science fiction mixed with historical fiction, with an added a dash of romance and a heap of suspense, all culminating to one of the most unexpected endings in literature make this a book you can't afford not to read!

Purchase The Sun, The Moon and Maybe The Trains via: 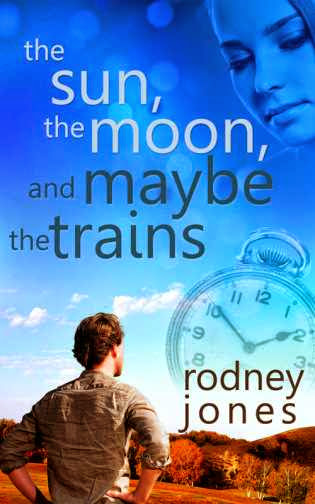 Posted by Kelly Smith Reviews at 10:09 AM