“I am a phantom. Barely human with the duty to get rid of the possessed. That is why beings like me were created, why we were bred.”
In a dying city filled with a deadly plague and even deadlier creatures, Déjà hides from a past drenched in blood and the only family she has ever known. She hates what she is and her cravings to spill fresh blood drives her away from anyone that gets too close. Living out her life wearing lace corsets and working in an underground nightclub keeps her secret from hurting others, until a bounty is placed on her head by a mystery benefactor.
Now she is stalked by an assassin that threatens to steal her heart and discovering a family of powerful beings that hold the key to her past, Déjà has no choice but to embrace what she truly is in order to battle the secrets that the city holds within its shadows.

As a fan of the paranormal, I'm very familiar with phantoms. A lot of people have different opinions on what phantoms are, exactly, but none of them give them such humanity as Leah D.W. did here in Phantom 2.0.
Right off the bat you care about Déjà, even sympathize with her. She cares about people, doesn't want them to come to harm and is forced to do things she doesn't want to to save herself. I love strong female leads like her.
The story gives you chills, it drags you in from the very first page, and it makes you think. You have to wonder who's good, who's evil and what is going to happen before the end of the story.
I definitely want to read more books with these characters! Another great work from Crushing Hearts and Black Butterfly Publishing!

Purchase Phantom 2.0 on Amazon and add it on Goodreads!

I love all of the characters in Phantom 2.0, but there is one whose character and backstory is starting to develop more and more the longer I spend time with this tale and I believe he deserves to become the reader’s favourite. Cael is a club owner, sarcastic bad boy and has his own bucket full of mysteries that even shock me! He will make more of an appearance throughout the series and so here are his thoughts that took place during Phantom 2.0 (book 1) that will spark some interest for what is to come and sheds some light on the main character’s dark past:

That waitress is going to be the death of me!
Why did I ever agree to hire her? Oh yeah, her trainer threatened to turn me inside out if I didn’t give her a job that would keep her in the city instead of allowing her to return home. The girl was going to stay either way. She is keeping a secret that I don’t care of to find out, but I can see it like a shadow within those large eyes. Eyes of blue and violet thunder. Eyes that once belonged to a young girl that almost caused my death. Could she be that same little girl that sang up to a thunder storm and danced around in crimson soaked silk? Then she should be older right now. It can’t be her then. But why does she look exactly like that murdering pre-teen?
Same face. Same eyes. Same voice!
Perhaps she is her younger sister or distant cousin…?
No, that isn’t it. This frustrating woman isn’t as annoying as that doppelganger or as mentally insane. Besides…I killed her almost twenty years ago. Didn’t I? My flames charred her skin and turned her into a pillar of ash before she was able to sink her blade into my heart. So…that waitress can’t be her unless that girl was immortal or…
Could it be? I’ve heard the stories but…they are just stories. Right?
Perhaps Kyra is keeping a secret of her own from me and that is one I intend to find out, before that waitress burns down my club! 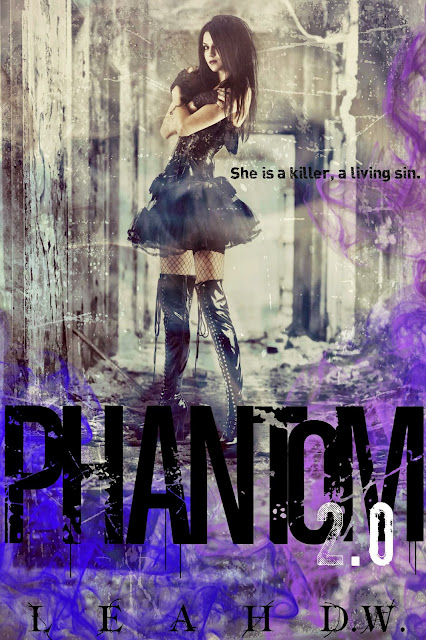