BLOG TOUR: "The Weight Of Guilt" by Jon Ripslinger 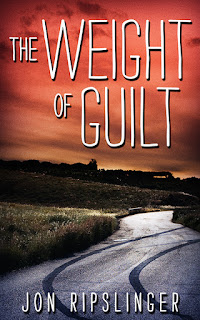 Driving home from a bonfire party, eighteen-year-old John Hawk crashes, killing his girlfriend, Riley. Bullied and tormented at school, and crushed by his guilty conscience, John transfers to a school on the banks of the Mississippi River, where he attracts the eye of the principal’s daughter, Megan. Though he’s reluctant, she convinces him to be her prom date. The morning after prom, Principal Jones reports Megan missing. Four days later, her body is recovered from the river, and John becomes the prime suspect in her death.
Charley Cotton, Megan’s best friend, knows that Megan had a secret, but she doesn’t trust John because of his past. John is desperate to avoid adding to the shame he carries for Riley’s death, though—it’s destroying his life. With Charley’s help, he learns that others in Megan’s life had a motive to keep her quiet. But every effort they make to uncover the truth edges them closer to a desperate murderer with everything to lose.

Riley's drunk, and it's all my fault. Swaying near the blazing bonfire with a dozen other kids, she's guzzling beer from a red Solo cup. They laugh, jostle, and slop beer over themselves.
Damn! I should have been paying more attention to her. I should have kept better track of time. You idiot, John! I need to get her home and tuck her into bed—now—or we'll both be in deep crap. I step up behind her in the brilliant firelight. The heat feels good on my face and arms, but the smoke curls into my nostrils, and I cough. Someone must have piled wet logs onto the blaze.
I touch Riley's shoulder. "We better go."
She whirls. "Where have you been?"
"Checking out Brian's weightlifting equipment. I forgot the time. Sorry."
Flames leap and crackle into the crisp night air, casting flickering shadows across Riley's face. Her eyes glitter like stars in the inferno. A few kids rotate, trying to keep all sides warm. Earlier, we roasted hot dogs, bratwurst, and marshmallows over the oak blaze.
"What time is it?" she asks, her words slurred a little.
"Midnight." I’d promised her folks I'd have her home already. I don't need them yelling at me again. Or breaking us up. That thought jars me. I'd rather lose an arm and a leg than lose Riley. She's the only thing good in my life, except wrestling.
"They never come home before two or three," she says and gulps her beer.
"Let's throw that away. You've had enough to drink."
She smiles, her mouth crooked. "Look who's talking."
"I haven't had a sip." True statement. I never drink the night before a wrestling tournament. I dump Riley's beer but hang on to the cup—I don't litter. I also help little old ladies cross the street. "I can do without your folks being pissed at me. They already don't trust me."
"Yes, they do." Riley grabs my free hand and squeezes.
After planting a kiss on her forehead, I say, "C'mon, pretty lady. Home we go." I guide her by the elbow away from the fire.
The party was a spring break bash at Brian Holdorf's parents' farm pond. Dense woods block out half the sky, and a breeze ripples the treetops. My arm around her waist, I guide Riley across the pasture to my car, which is parked by the farmhouse. A squatty barn and a tall silo loom close by. Brilliant stars and a huge moon light our way. Laughter drifts up from the pond, and the scent of pigs floats in the air.
Opening the car's passenger door, I toss Riley's cup in the back. Then I slip her into the seat and close the door. After I climb in, I close my door and poke the lock button to make sure we're secured. "Buckle up."
Rather than take Interstate 80, I drive a ribbon of country blacktop that twists through hilly farmland. I think I can drive the blacktop faster than the highway—hardly any traffic and less chance of the cops picking me up for speeding. I don't need another face-off with them.
"I'll bet my parents aren't home," Riley says after we've been on the road a minute or two. She leans over and kisses my cheek. "Let's park somewhere. This road's dark." Her hair smells of wood smoke, her breath of stale beer.
I smile. I wouldn't mind parking for an hour or so and making out. "We need to get you home and into bed."
Wisps of fog curl in my headlights. I'm zooming downhill toward the Des Moines River, and the curtain of fog thickens quickly. I cut my speed from seventy to fifty, then to thirty. I don't want to be going too fast if a deer darts into the road. Fifteen…
The fog turns dense—a gray, billowing wall that reflects the glow of my headlights back into my eyes. I squint and dim the car lights. I swallow and slow the vehicle to a crawl: ten miles per hour. I glue my eyes to the yellow center line and guide the car's left fender along the line.
"Why are you slowing down?" Riley asks.
"Can't you see how soupy it is out there?"
I'm not sure when I cross the bridge over the river. The fog is too thick to see even the side rails. But when I head uphill, my grip on the wheel eases. I fill my lungs and exhale slowly. I've escaped the danger. The moment I can see ahead of me though—still going ten miles an hour—I spot headlights racing toward me. They blind me. I barely have time to swear.
This can't be!
Even Riley sees the headlights. She screams, and the next sound is the wail of my horn and the hideous grinding shriek of brakes as I try to swerve and evade the headlights. 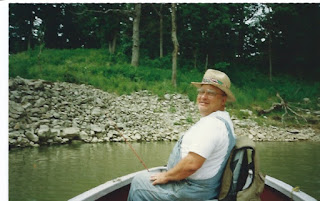 After Jon Ripslinger retired as a public high school English teacher, he began a career as an author. He has published many young adult novels and truly enjoys writing books for teens. He has also published numerous short stories in Woman's World magazine.
Jon and his wife, Collette live in Iowa. They are the proud grandparents of thirteen grandchildren, and three great-grandchildren.
When not working writing, Jon enjoys the outdoors, especially fishing. He waits patiently for the next "big one" to strike.

Believe it or not, I like YA. Shocker, huh? I don't get a chance to review it often, but the young adult genre has a certain je ne sais quoi that appeals to me, and many other adults to whom the books are not marketed. The Weight Of Guilt is one of the YA books that I could honestly see anyone of any age reading. This is the thing about mystery and crime: it's fun for all ages! I started reading Doyle at nine. Watched Veronica Mars at twelve. Wrote my own mystery at twenty. It's a timeless genre that does not need improvement or embellishment.
TWOG is a fast-paced read. It does not linger like some novels can, especially when you take into account that the subplot is romance. It tells you little and reveals all at the very end, holding your attention and making you read past your bedtime (if you've got one).
I liked the characters. They were not unique, but they were realistic, giving the story a sense of authenticity. I could see them clearly in my mind, and would love to have this made into a film. It was visual and made you think, guessing till the very end.
While this was not a perfect novel, it was a fun novel. It could've used more originality in the storytelling itself,  but the characters and plot are excellent and unforgettable. Definitely add this to your TBR list!