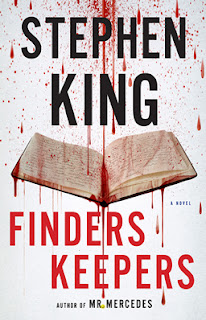 A masterful, intensely suspenseful novel about a reader whose obsession with a reclusive writer goes far too far—a book about the power of storytelling, starring the same trio of unlikely and winning heroes King introduced in Mr. Mercedes.
"Wake up genius." So begins King’s instantly riveting story about a vengeful reader. The genius is John Rothstein, an iconic author who created a famous character, Jimmy Gold, but who hasn’t published a book for decades. Morris Bellamy is livid, not just because Rothstein has stopped providing books, but because the nonconformist Jimmy Gold has sold out for a career in advertising. Morris kills Rothstein and empties his safe of cash, yes, but the real treasure is a trove of notebooks containing at least one more Gold novel.
Morris hides the money and the notebooks, and then he is locked away for another crime. Decades later, a boy named Pete Saubers finds the treasure, and now it is Pete and his family that Bill Hodges, Holly Gibney, and Jerome Robinson must rescue from the ever-more deranged and vengeful Morris when he’s released from prison after thirty-five years.
Not since Misery has King played with the notion of a reader whose obsession with a writer gets dangerous. Finders Keepers is spectacular, heart-pounding suspense, but it is also King writing about how literature shapes a life—for good, for bad, forever.

I purchased this book from Barnes And Noble for my own pleasure.

A reader experiences two things when they first hold in their hands the newest novel by their favorite author: excitement (of course), but there is also a bit of trepidation. Will this live up to their last novel? Will I be disappointed? Will I want to hit their computer with a hammer?
For me, I ask myself those questions whenever there is a new Stephen King novel released. If you know me, you know he is the man whose work has influenced me since I was in middle school. And you will also know that I have absolutely loved everything he has put out lately.
I'm not a literary snob. I read popular current authors as well as indies and classics. Rarely will you ever come across a novel that, aesthetically, is true literary gold as well as frightening and entertaining. Finders Keepers is that novel, possibly the novel future generations will look at as two things: how to write a kick-a** thriller that leaves readers on the edge of their seats, and a commentary on human nature in various ways. I won't go into those ways here (I am not a scholar. I read for pleasure 99% of the time.) but I will say that I hope I can take part in these discussions, because I know that King brought up some really dark and accurate points about life in the recession, about obsession, madness and human nature as a whole.
This is a continuation of Mr. Mercedes, his 2014 thriller about a madman who killed and injured dozens of people with a fancy car, but that story takes a backseat...for a while.
We do get to see the heroes of Mr. Mercedes in all their glory: fast-thinking Det-Ret Bill Hodges, the obsessive-compulsive yet lovable Holly Gibney and the intellectual and humorous Jerome Robinson. In this story they have to help a teenage boy get out of a pretty big jam thanks to one crazily obsessed literature fan, Morris Bellamy.
When people read the description, their first thought is, "Oh, he's repeating Misery." No, no, NO! Do not think that. Wipe that thought from your mind. Yes, Finders Keepers is about an obsessed fan of a certain writer and their outrage over what said writer has done to their favorite character. But the similarities stop there, reader. Morris is not as crazy as Annie Wilkes, and his crazy is of a different kind. I could go into psychoanalysis, but I won't bore you.
Here are the high points for me: the amazing cast of characters. Reading about Bill and the gang was like reuniting with good friends. I love them, and will be sad when the third and final book about them is released, because I will miss them.
The characters original to the book are also well developed and memorable: Morris and the Saubers family, even John Rothstein, the fictional novelist killed in the first chapter. Morris and Peter Saubers are two sides of the same coin: both huge Rothstein fans and both obsessed with the stories he wrote about his protagonist but never published. Morris is the insane side, and Peter is the caring side. You, like me, will melt with joy when you see how much Peter cares for his family.
The other thing I loved was how literary appreciation is so prevalent in the story. A love of literature is a beautiful thing, even the insane love Morris has. It's compelling and made me enjoy the story more, because those are emotions I can relate to as a Constant Reader.
Stephen King can write horror better than anyone else I have ever read. But his scariest villains are not the Barlows or the Randall Flaggs. No, his most frightening antagonists are the ones we can relate to, the ones who are all too human. I did not fear the woman in the painting in Rose Madder, because she could never be real. I do fear the Annie Wilkeses and the Morris Bellamys, because they are very, very real. They are the dark part of every human soul and they could be your neighbor, your friend, your sibling...or they can be you.
When it comes to crime thrillers, you will also never come close to the gritty, realistic way King writes. If I can ever be half as good as him, I will be quite pleased.
Finally, the killer we met in Mr. Mercedes has not been forgotten! I can't say much about it, but there is a cliffhanger from Hell at the end, and we will definitely be seeing the murderous son of a b*tch in book three, or my name is Kelly Smith!

5/5--Did you expect anything else after this long, gushing review?