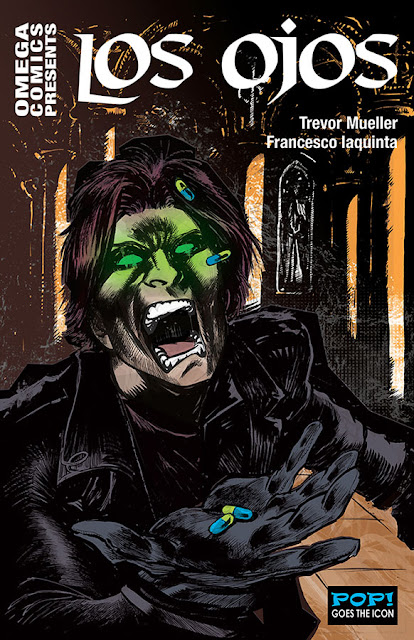 Demons fear what ‘Los Ojos’ see in the latest issue of ‘Omega Comics Presents’
Digital-first anthology series returns Jan. 13, 2016 with a standalone supernatural thriller by Trevor Mueller and Francesco Iaquinta
Andres Sanchez sees demons. Literally. When he looks into a person’s eyes, he can see whether or not they are truly demonic in nature. Hired to find and assassinate a known child trafficker, Sanchez goes on the hunt, taking out demons as he perceives them, getting ever closer to his target. But can Sanchez truly trust what he sees?
Readers will find out when Pop! Goes the Icon’s flagship anthology series Omega Comics Presents returns on Jan. 13, 2016 with “Los Ojos,” which tells the story of Sanchez, a hitman whose senses allow him to see the true nature of his targets. This one-shot tale is written by Albert the Alien co-creator Trevor Mueller and drawn in dramatic black-and-white by Italian artist Francesco Iaquinta.
Omega Comics Presents: Los Ojos will be available for only 99 cents at ComiXology, ComicsPlus and DriveThruComics. A limited-release print edition will be available beginning Jan. 20 through PopGoesTheIcon.com and at select comic book stores.

MY REVIEW (I received an advance copy from the publisher in exchange for an honest review)
I have never read a single issue standalone comic. I know, right? As an avid comic lover, I love the ongoing stories that keep me engaged month after month. However, knowing what great work Omega and PGTI publishes, I decided to accept this review copy of Los Ojos.
I am very glad I did. The first thing you notice about this comic is the art. It is stark, dark, and brutal, perfectly fitting with the narrative. Iaquinta is a very modern artist, and I could see sketches by him hung in galleries all over the world.
Mueller's writing is short, choppy in places, but fitting. It is dark, brutal, and straight-to-the-point...or is it? He writes a fantastic twist, and while I could honestly go on and on about the hidden meanings in this book, I am afraid I'll give spoilers. He makes you question a lot, from the reality of good and evil, to the soundness of your own mind.
In short, this is a must-read for fans of comics by Neil Gaiman, or comics about Deadpool or Deathstroke. It is not, however, for the faint of heart.

About Omega Comics Presents
Launched in 2010, Omega Comics Presents is an anthology series whose mission is to provide a platform for underexposed comic book creators. Behind the quirky stories of mobster ghosts, stranded astronauts and wartime vampires are a number of creators who have gone on to find success both with independent endeavors and mainstream projects, including Jason Copland (Kill All Monsters, POP), Ed Brisson (Murder Book, Sheltered) and John Bivens (Dark Engine, Old Wounds).
About Pop! Goes the Icon
Launched in 2009, Pop! Goes the Icon (PGTI) is a boutique print and online publishing house, specializing in comic books, graphic novels and webcomics, known for such titles as The Utopian, San Hannibal and Old Wounds. More information can be found at popgoestheicon.com.
Posted by Unknown at 3:02 PM