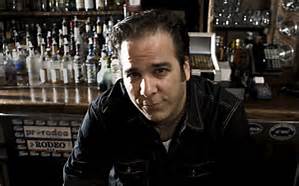 1. When /why did you decide to get into comics?
When I was young, not having all the choices of cable and TV at the time, I spent a lot of time reading and comics were a big part of my life.  I went to the High School of Art & Design in NYC to learn the craft, but sadly what I also learned at that time was that making comics was a poor mans job because then they paid horribly, and that's what got me into advertising for a long while. It wasn't until I was 30 that I decided I learned enough how to sell myself and work the system and figured out how to make money in the field that I went back to comics. Been working since then and love it more and more each day. Its one of the greatest jobs there is if you work for the right people.

2. You started out inking comics and moved into writing. What made you make that change?
I felt I did all I could with the inking. I won a wall of awards, worked with the top artists and inked close to a thousand books.  Inking held no challenge for me anymore, sadly… and I realized it became repetitive and boring to keep doing it, so I wanted to do something that I didn't find as easy. Writing, creating and drawing are the natural places to go after that and I’m still working on getting the writing to a better place. After that, it will be back to the art, or Film, or just starting to publish my own work more. The future is always exciting if you have some kind of focus on it. I have always been a dreamer, so this is a good thing. Boredom never sets in.

3. You frequently work with Justin Gray. Is it harder or more challenging to write with someone than it is to write on your own?
I find it harder now, but easier when I began. As I write more and more, I find I am feeling more confidence with my work and want my own voice to be heard, but at the same time there is a joy working with others, so its defiantly a mixed bag. In the end it depends on the person I am working with, With Justin and Amanda, its very natural and we play to each other’s strengths. .

4. What made you decide to start Event Comics?
You mean like over 20 years ago? The frustration of working for others and wanting to create something new and not always work on others properties. It was fun and short lived, but got me the Marvel Knights gig and now with Paperfilms.com, I have a much stronger company with an accessible store offering everything from prints, digital books and art. We all suppose to learn as we go, and in this case, I did.

5. With working on the Painkiller Jane comics and TV show, what was the biggest difference writing her for TV as opposed to comics?
More bosses- Simple as that. With comics I have only the editor…with TV you work with a group in a writers room and the network and studio you work for go over each line. There is a ton more freedom in comics, that's for sure. I love working in both because they each have different rewards. My current work is mostly screenwriting and running a film company called Trio Entertainment. We have a few things coming up in 2017 .

6. You wrote basketball films for Nike. Are you a sports fan at all? If so, what teams do you support?
I wrote that, and no, I am not a sports fan at all. I enjoy playing but do not support or follow any teams. I just have no interest. I would rather be at the beach reading a book. I’m not a fan of millionaires tossing a ball around. It just doesn't deserve my attention over the 100 other things I am interested in. I am happy others enjoy it though.

7. What established characters have you not written yet but would like to one day?
None in comics. I hit them all…my list is complete. In film, that's a different story, but in comic characters, I am done with others.

8. You and your wife, Amanda Conner, have worked together on Harley Quinn, and you also work on Starfire. I and many other girls thank you for writing them as appealing women but no longer objectifying them. What brought you to the decision to change how they are perceived?
I didn't. I wrote what I saw as strong women, and based it on all the women in my life. I have no idea how to write women any other way. I guess you can thank my parents and the good people around me for that. I have been writing strong female characters for over 20 years, starting with Painkiller Jane and now with Harley and Kori and the ones we cant talk about yet that are coming. I live in a world where women are equals. My doctor is a woman, as is my Lawyer and the partner in my film company, and finally, my partner in crime is Amanda Conner. Amanda is one of the smartest, considerate and sweet people I know that is an example to everyone around her. I find it sad that women are treated differently and I wish the rest of the world would catch up already to what I know and understand and hope the comics help in some way.

9. What do you hope to bring to female comic book characters in the future?
Just hope I can bring the joy to any character I write, male or female. There are plenty of dark characters out there and of late and that's great, but I really have been enjoying writing characters like Ivy, Harley, Kori and Atlee the way I would like to read them. I hope the future allows me the chance to expand on these characters even more and take that positive fun vibe to other characters as well. My ultimate goal is to continue to create new ones.

10. Can you please leave the readers with three things that may surprise them about you?
Hmmm, okay. First, I was an arts and crafts counselor in a summer camp for a few years in my late teens and early twenties. Second: I do not drink coffee, smoke cigarettes or eat peanut butter. I know…I get crap about the peanut butter from everyone. I also do not like mushy textured foods. If it crunches, I like it, generally.   Last, I buy about 3 albums a week from new artists and hit the movie theatre once a week to enjoy a foreign film. My local theatre plays 2 a week. I like seeing movies I think I will not like the subject of…mainly to be swayed.