In the year 2036, solar storms batter Earth crippling electrical infrastructures across the globe. Night falls and the ensuing pandemonium claims millions of lives, catapulting the world into chaos.
In the midst of this global turmoil a hero emerges. The altruistic SUN Council intercedes, constructing enormous domes on each continent to protect the world’s population from the radioactive CME’s of the incessant solar storms.
But not everyone makes it to the domes. In an attempt to survive the deadly radiation, hundreds of thousands of people dig into the earth, living in squalor under an oppressive military dictatorship.
Now centuries later, the final stage of the SUN Council’s plan to decimate the world’s population approaches. But as victory glimmers on the horizon, two women from discordant halves of this new world start to unravel the conspiracy.

When we think of the greats of the science fiction genre, the first name that comes to mind is Issac Asmiov. He reinvented the genre and gave us a lot of information to process.
When we find ourselves thinking of the greats in the next decade, we will inevitably mention Ronel van Tonder, whose debut novel Compile: Quest is a feast for the imagination.
The story centers around a world in turmoil, even though some of the inhabitants have no idea that things were not always this way.
You have your typical elements, like a corporation trying to control everyone, robots as personal assistants and vicious war raging behind the scenes. But you have your unique points, particularly that the hero isn't a hero: it's a heroine. Two of them, actually. The two women chosen by the author to stop the SUN Council and end the war are as different as night and day, yet offset each other perfectly.
This world she created is frightening and somehow beautiful in its strange, cybernetic way. I love the lifestyles with robots and medical pods, all the strange things that, in 2014, don't seem to be that fictional.
Reading this is like going into a virtual reality machine, actually, and you won't want to leave once you've entered. 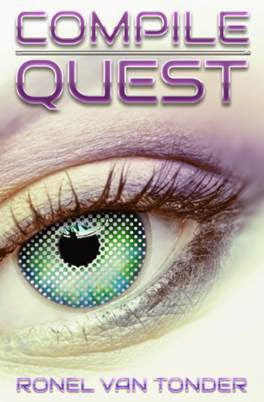