MOVIE REVIEW: "The Hobbit: The Battle of the Five Armies"

We all know the tale, a hairy little hobbit named Bilbo gets unwillingly taken on an adventure with a company of thirteen dwarves and Gandalf, a wizard. The dwarves, led by King Thorin Oakenshield, are on a quest to reclaim their homeland, the mountain Erebor, which is filled with treasure...and guarded by the dragon, Smaug.
Along the way, Bilbo meets a strange creature named Gollum, and takes his magical Ring.
The evil Orc king, Azog the Defiler, is hot on their tails, getting ready to stir up an ancient evil. To top it off, the Woodland elf king Thranduil wanted to keep them prisoner, but his son, Legolas Greenleaf, wants to help them fight, and Tauriel, an elf of high standing, is falling for the dwarf prince, Kili.
During the first two movies is when all of this happened, in An Unexpected Journey and The Desolation of Smaug. Now that I've caught you all up, let's commence with the review of The Battle of the Five Armies.

This was my first 3D movie, believe it or not. I hadn't gone to see either of the fist two Hobbit films in a theatre, but I knew I had to go see this, what might very well be the final Tolkien film.
This movie picks up right where Smaug left off, with the dragon terrorizing Lake-Town, laying waste to all in its path. Bard needs to escape prison and Thorin doesn't seem at all inclined to help. The effects right off the bat are beautifully done. Especially in 3D, you wonder how it is that the fire isn't singing you.
What I liked was that (and this is you're only spolier you're going to get from me) they didn't linger overlong on the dragon and that battle. It was taken care of quickly and with the dramatics it deserved.
As the film went on, the effects got even better, drawing you in and making you feel like you're there, at Bilbo's side. They aren't effects to say, "Wow, that's unrealistic," but instead they made it all feel real, even the impossible things, like Dain (another dwarf who comes in later on in the film) riding a hog of some sort, or Thranduil's elk.
The five armies consist of Men, dwarves, elves, orcs and animals (the eagles, Beorn, etc.), for those thinking there are only four armies. Unlike The Return of the King, this battle isn't huge and impersonal, making you feel like a spectator in a sport. This was smaller (though no less violent), and you felt invested in it, as though you were fighting.
The story varies from the novel, I'll admit that. It varies far away, though not as much as the previous films. But the way it varies is necessary to make a good movie. Every call Peter Jackson made, from adding Legolas and creating Tauriel, to expanding certain scenes that the book cut short, was integral to making this movie as enjoyable as it was, and tying it into the LOTR trilogy better. Had they stuck straight to the book, Thorin would not be as likable and they would have only made one movie due to lack of content.
The acting is beyond incredible! We mostly know Martin Freeman (Bilbo) as a comedic actor, but as Richard Armitage (Thorin) said in an interview, he is a tremendously talented dramatic actor as well. He truly stunned me. His emotions are so raw and pure, it's just beautiful.
Armitage also surprised me here. While I enjoyed him on Robin Hood and in the first two films, I never imagined the depth of his talent. He has to act mad, and insanity isn't an easily conveyed state of mind. I can only imagine what it took out of him to portray the dragon-sickness to the audience. And the end...he truly captures your heart.
Lee Pace, Luke Evans, Evangeline Lilly, Aidan Turner; all of them give wonderful performances, the performances that will very likely define their careers. If none of them are nominated for Oscars, I just might protest.
Advice for watching the film: discard the book for three hours and enjoy the amazing ride this cast and crew takes you on. Also, invest in Kleenex. Even if you know how it ends, you'll still cry. 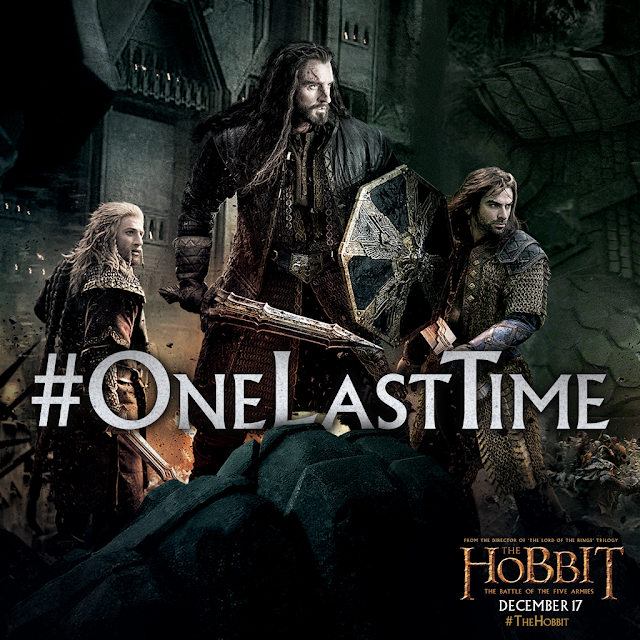 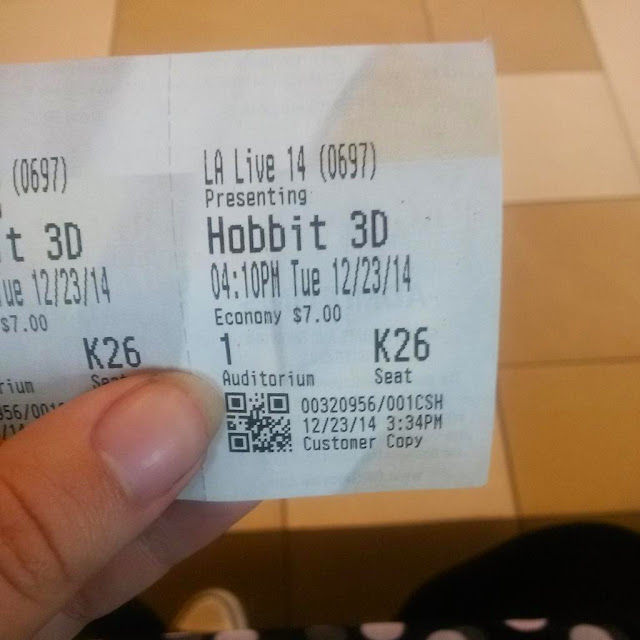 Posted by Kelly Smith Reviews at 12:01 AM