#Synopsis:
They were the most unlikely pair to fall in love. . .
A golden boy with a dark past. A bi-racial girl with epic faith. These two weren’t supposed to survive the system, sketchy origins and all.
Trevor Kyle has loved Shanice Bailey forever—from the time they both landed in the Baptist Children’s Home until they were young adults raised by adoptive families that had no resemblance to the worlds from which they came. Trevor has always been her protector and champion even when he was busy pushing her away for her own good.
Shanice has always taken her faith in Trevor seriously. Her childhood oath is strengthened when she learns the true meaning of family. But After Trevor’s adoptive parents die tragically and his bachelor uncle takes him in, she finds that the boy she’s always looked up to has changed, and not for the better. Yet, she can’t bring herself to forget him as her pure childhood love for him blossoms into something more.
The most generous heart and truest faith does not travel an easy path. Just when Trevor thinks he’s found a way to keep his promise to be with Shanice forever, a specter from the past threatens their future plans.

#MeettheAuthor:
Bev Elle the author of sweet and spicy, contemporary romance. A lover of books–many already written, and those she harbors in her very active imagination. Writing is a passion she’s had for many years, but was unable to act upon. Until now. Bev Elle is the mother of three human children and two canines. She is also the lover of one husband :) When Bev isn’t writing in her spare time after work, she is thinking of doing so.

#Excerpt:
“You want to be a doctor?” Trevor said.
“No, a nurse. I want to help people get over drug addiction and stuff, but I don’t want to go to school for all the years it takes to be a doctor.”
“That’s cool. Just don’t fall for some doctor and forget about me,” he teased.
“I’d never forget you, Trevor,” she said. “And I’ll never fall for some doctor.”
“How do you know?” he said. “You’ll go off to college and I’ll be as good as forgotten.”
“You’ll forget me first,” she said. “You already have. You’re the one who’s taking Emily Winters to the prom and everything.”
“It’s just another rite of passage.”
“A what?”
“It’s one of those things you’re expected to do at certain ages that transition you from one stage in life to another.”
“Oh, well. I’m not passing any rites with anyone but you,” She said.
“You’re too young to say that, Shanice. You’ve got a lot of growing up to do.”
“So do you.” She protested, just as he expected her to.
“Yeah, but I’m closer to twenty-one than you are, and I’ll be going off to college in a couple of years.”
“I know, but I won’t forget you,” Shanice said with conviction.
“How do you know this?” Trevor asked.
“Because I’m going to be like Amy March in Little Women.”
“Never heard of it,” Trevor said.
“Probably because boys think it’s stupid. But there is a Little Men, and Jo’s Boys and they’re about orphans and stuff. Anyway, they’re classics. Mom read the books when she was about my age, so she gave them to me for Christmas.”
“What does this have to do with you not forgetting me?”
“You’ll have to read Little Women to find out,” she said cryptically.

In the Obsidian Collection, one of the stories included was Obsidian Faith by Bev Elle, and it was also one of the two stories I said could easily be expanded. While it was fine on its own, I knew that there was more to Trevor and Shanice's story than was originally told.
Trevor and Shanice meet in the foster care system and immediately take to one anothe, despite a slight age difference. When they both get adopted by different neighbors, they think their ship has finally come in. But when Trevor's parents die I'm a car accident and he has to go live with his unsavory uncle, everything goes downhill.
Trevor is a computer genius, and his uncle threatens Shanice's life if Trevor doesn't comply with his illegal demands.

Like I said, the original short story was great, but I knew that there was more to it, and there was.
This is a love story above all else: Trevor loving Shanice enough that he was willing to give her up to save her life, and Shanice loving Trevor enough that she keeps her faith in him even when he lands in prison. You feel Trevor's pain as he is forced to push the love of his life away. You can also feel his desperation and determination.
Shanice is an admirable woman, staying true to her gut even when everyone told her she was a fool. She's smart, pretty and has a mind of her own. She goes from the perfect little sister to the perfect lover in a few chapters.
The backbones of the story are a considerable knowledge of computer science, much more so than this reader has! It gives the story a very authentic feel.
The second is the religious undertone. The lovers meet as kids in a church-run children's home, and the pastor and his wife adopt Shanice. It is what adds beauty to what us a slightly dark tale, the morals the characters adhere to, even with all the debauchery in the book.
The cherry on top of the cake is the ending, which is very close to making Obsidian Faith a thriller as opposed to a love story.
Is this a story for everyone? No. But it's a story everyone should read. 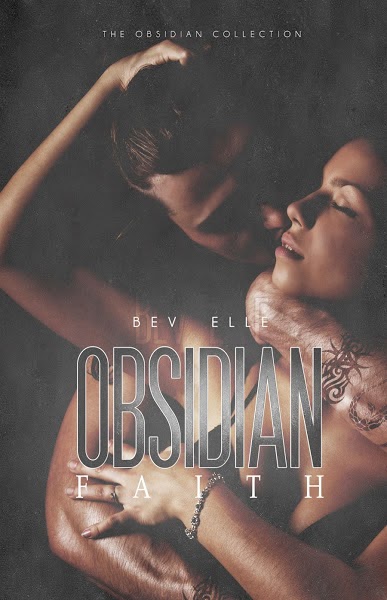 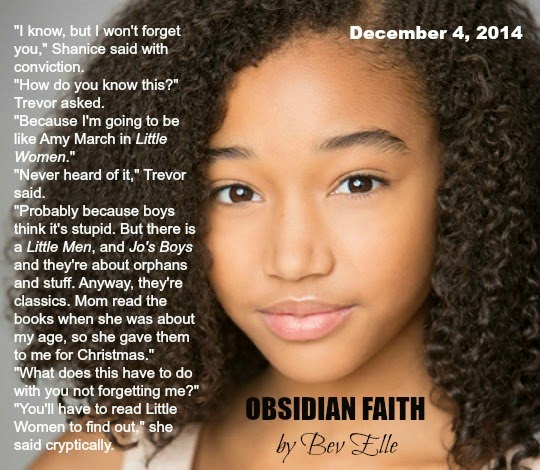 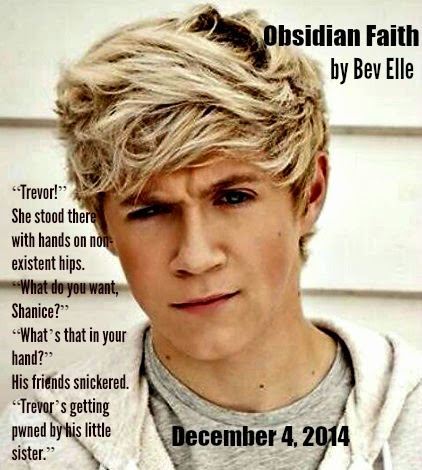 Posted by Kelly Smith Reviews at 10:27 AM