For Calum Ranson, seventh grade brings changes in his relationship with his parents and his friends, and a confrontation with his bully. Calum’s talents have also developed to a level unheard of in the Sidhe world, and he surprises everyone when he cleverly catches the person responsible for casting Finley out from the Otherworld.
When Calum goes against everything he knows is right, he makes a choice that may cost him his friendship with Laurel. An old friend steps in, but her mysterious ways leave Calum questioning her motivation.
In the second book of the Sidhe Series, Calum, Laurel, and Hagen reunite in their search for Finley. And while many things have changed, Calum remains steadfast in his belief that Finley is still alive and that Calum will bring him home.

In the YA fantasy genre, rarely will you find a story so involved, so deep and mysterious. The first thing I thought was that Ms. Cipriano did not write this for children as most writers would: she wrote thia for people. She didn't "dumb down" anything, as some YA authors are known to. She assumed that teens would understand or strive to understand every emotion, every name and every element of the story. I give her a lot of credit for that. The last thing any teen wants is to be talked down to.
The story is a sequel of The Circle, and while I would recommend reading that first, it's not entirely necessary to do so. The Choice can be enjoyed on its own.
Ms. Cipriano really did her research with the Sidhe, an obscure Irish myth. I don't think I've ever read a book about the Sidhe tgat was written after the year 1900! As a lover of anything paranormal or mythological, I found myself enraptured and immersed in the backstory and the fates of the characters.
The story is about belief, friendship and loyalty. Great lessons for kids and adults alike! You can ignore the YA shelving. This is a book for all ages.

The Choice will be available on Amazon soon! 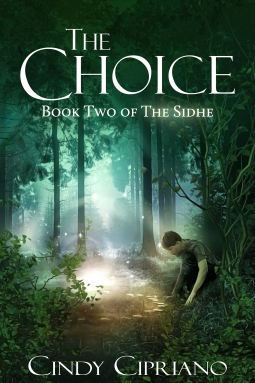