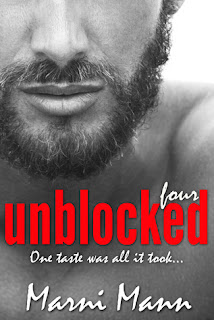 Derek Block is ready to fight. Frankie Jordan must make a decision. Their pasts are demanding attention. Confessing the truth may not be enough. But can their intense passion sustain them? This is Episode Four of the five-episode Timber Towers novella series.

Episode Four Excerpt:
“Tonight is about us, no one else, and that’s the way I want it to stay. No more interruptions,” Derek said.
I took a deep breath and reached for my wine. I wasn’t going to let my brain jump to conclusions. This weekend was about us. Not Taylor. Not Reed. “I agree.”
He leaned into the table, his hand moving higher up my leg. “Kiss me.”
We weren’t in a back booth, and this restaurant wasn’t nearly as private as The Hole. There were more servers, a more open floor plan, many other tables close by. What he was asking for was much more than the peck I had given him before I’d gone to the bathroom. “Those fingers,” I said, placing my hand on top of them, “aren’t planning on going any higher, are they?”
He licked his bottom lip, teasing me with just the swipe of his tongue and the whiskers that surrounded it. “They weren’t, no. But now that I know it’s on your mind, I’m not sure I’ll be able to stop them.”

I have been reading the Timber Towers series since day one. I'll be honest, I have no idea why I agreed when I was asked. I usually only do reveals or blasts for erotica, because I do not consider myself well versed enough in the genre to grade it.
Taking a chance on Derek and Frankie was the best thing I ever did! A few months ago, Ms. Mann was able to give me a new perspective on the erotica genre and I realize why it is so popular: it's so real. Especially her writing, she makes us feel their emotions. And this episode definitely got emotional.
We see Frankie making a very difficult decision: be a good worker, or be in love? Because of Derek's secrets, she isn't sure she can commit herself to him, and he realizes this. As he slowly starts to reveal himself to Frankie, we are left hanging on every breath, every heartbeat. I think that was the only part of this story that I found unrealistic: no man is like Derek (at least, not in my experience). His candor and his deep love is the icing and cherry on top of an already delicious sundae.
The sex just gets hotter as each episode is released. I DO have underage readers on this blog, so I can't go into detail, but if you like your romance dark, steamy and hard-hitting, this is the series for you!
It's not all about sex, and that's what I love. It's about self-restraint, respect and honesty. Frankie's story (if episode five proves to give us a happy ending) could be a modern-day fairy tale for adults.