BOOK REVIEW/INTERIVIEW: "An Other Place" by Darren Dash 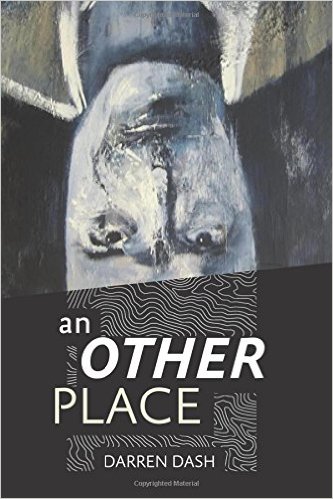 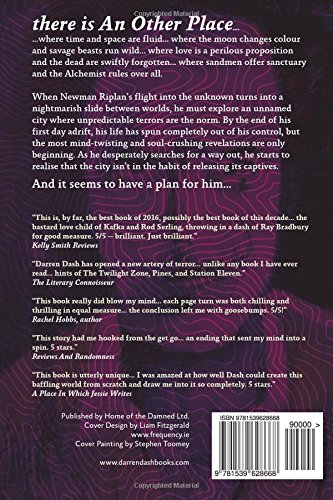 There is An Other Place... where time and space are fluid... where the moon changes colour and savage beasts run wild... where love is a perilous proposition and the dead are swiftly forgotten... where sandmen offer sanctuary and the Alchemist rules over all.

When Newman Riplan’s flight into the unknown turns into a nightmarish slide between worlds, he must explore an unnamed city where unpredictable terrors are the norm. By the end of his first day adrift, his life has spun completely out of his control, but the most mind-twisting and soul-crushing revelations are only beginning. As he desperately searches for a way out, he starts to realise that the city isn’t in the habit of releasing its captives. And it seems to have a plan for him...

I received an ARC of this copy from the author in exchange for an honest review.

Okay, this might be a lengthy review. This might be a rambling review. But that's what you get from me when I've read what is, by far, the best book of 2016. Possibly the best book of this decade (but as that isn't over yet, I don't want to be too presumptuous).
We know Darren Shan as the author of horror fiction for teens (and adults). We know Darren Dash as an author of more modern, realistic tales for adults. This new Darren Dash book is like neither person.
We meet Newman Riplan, a party boy with his partying friends in Amsterdam. After imbibing in every vice imaginable, Newman's friends decide to send him on a plane to an unknown destination, to give the overworked man a needed vacation for a couple of weeks. On the plane, he chokes and blacks out because of a peanut. When he wakens, his fellow passengers are now wax dummies. He is the only living soul on the plane.
What happens after is a long tale of one man's living nightmare as Newman finds himself in The City (that's all it's called), a place where humans have no idea who they are apart from first names, drones (what were formerly the humans on the plane) are a source of nourishment, income, and used as slave robots, werewolf-like creatures terrorize the town on a semi-regular basis, and electricity is nonexistent, as is glass.
This story was touted to be similar to the works of Kafka, and I am inclined to agree, but not just Kafka. This is bastard love child of Kafka and Rod Serling, throwing in a dash of Ray Bradbury for good measure. It's not just the eerie overtones of the story, the barely disguised panic you can feel seeping from the words to your mind, or the royally effed up nature of the way the inhabitants of the City live that grab you. Despite Newman being one of the least likable protagonists I have ever encountered in fiction, you become immediately invested in his life, his story. You want to know if he ever gets back to his world, an other place than the City, if he goes mad, or if he assimilates and blends in with it all.
There are a few things that stuck out in my mind, some metaphors that have to do with sex, barbarianism, creationism, and the latent animal instinct every human being has within them. I wish I could say more, but spoilers are a big no-no here at KSR. I will tell you that this book not only entertains you for hours (and I am already trying to see if I have time for a reread), it really makes you stop and think about EVERYTHING. Were the drugs a part of the reason why Newman winds up where he is, or was it just the choking? (A question you'll really be asking in the last two chapters.) Is sex really so animalistic, and are creation and procreation really such disparate things? Is the desire to be different, to stand out, a downfall, or is it worse when you adapt to society and become like "them"? Is love so fleeting and tangible? How important is time, the past, or the future? Is it more blissful to just live in the "now"? Are we really all just "drones" here in our world?
It's rare that I get a book that has my mind going like this, and you can't imagine the pleasure this gives me. I'll probably think of a million more things to add to this review and complain that I can't.
All I can say is that if you don't read this book, you're doing your brain a great disservice. This is about society, pack mentality, creationism, and so much more, all wrapped up in one crazy package.

Purchase An Other Place via:

Official site (has all purchase links for every retailer/country)


1. When I started the book, I didn't like the protagonist very much, but I understood him. Was he intended to be the "everyman", thrown from normality into surreality, so to speak?
Yes. I know Newman isn't especially sympathetic, but that was deliberate. Things were going to be hellish enough for the reader, without having them feel too much for the main character too! But I also wanted Newman to be "real" and someone that readers could identify with, and I hope that readers will see sides of themselves in him and cut him some slack. Newman isn't who we would like to be, but I think he's very like how many of us actually are, especially in our twenties, focused on a successful career and living the good life. I don't think Newman is a bad guy per se, just someone who's a bit too selfish and ignorant of other people's feelings.

2. I understand the concept of time in the city, but what was the reasoning for you having characters fall in and out of love so abruptly?
The book is, for the most part, a way for me to look at where I was at that stage of my life, to try and make some sense of it, and hopefully help myself become a better person. Yes, in a weird kind of way, it's a self-help guide! I wrote the first draft of the book way back in 1998, when I was in my mid-twenties, before any of my books had been released. It was an incredibly creative and productive time of my life -- my brain was firing in all sorts of weird and interesting directions, and I was typing away like mad -- I think wrote first drafts of seven different books one year, and that was while editing drafts of other books too. But socially I was leading a very withdrawn life. I have slight OCD (well, I think it's slight, though others might disagree!) and I was giving way too mcuh to that side of myself in the 90s. I wasn't quite at Howard Hughes levels, but I could see myself going more and more that way. I spent my days writing and watching movies and TV shows, and doing very little else. I had strict schedules in place that I almost never deviated from. I didn't engage much with other people. I felt I had to jolt myself out of this, or risk cutting myself further and further adrift of the rest of the world, and An Other Place was my unusual way of digging myself out of a hole of my own making. Hence the emotionally withdrawn citizens of the city, who behave like machines in many ways -- they're mirror images of myself, and as Newman tries to understand and connect with them, I was trying to understand and connect with the people in "our" world.

3. Trying not to give spoilers, was it intentional for you to equate sex with animalistic nature, and draw such a fine thin line between creation and procreation? If so, why?
I've always been interested in sex and creation, in looking at what drives people sexually, and how we try to control our sexual urges in order to create a "civilised" society. I also like to ask the big questions, such as "Where do we come from?" and "What's the point to it all?" As I already said, I was quite cut off in my twenties, not interacting much with other people, which meant I wasn't having any sexual interactions, which meant... well, to phrase it in terms of the book, I spent pretty much every day "doing a Newman!" i.e. I was masturbating a lot! I wondered (and still wonder, looking back all these years later) if that played into my creative spurt. I had no internet connection in 1998, so I had to use my imagination to stimulate myself, and perhaps the fact that I was using my imagination so much meant that I was boosting it, which resulted in more intriguing stories. I decided to play with those thoughts and incorporate them into the story, making masturbation a central pillar of the city's structure. Those aren't the sort of plot lines that I find myself conjuring up as a man in his forties, but I'm my mind was so fertile and downright strange back then, as it led me to explore some far-out regions of my brain!

4. In this story, I noticed a theme in two instances where the "outsiders" were the ones who always left their marks on the city. Was that also intentional, or did it just happen as you were writing? If it was intentional, what is your stance on how so many "outsiders" from our society have shaped our culture?
I think outsiders often can have a big mark on the world. Most people live normal lives, where they stick to well-worn paths, but we need creaive geniuses and madmen to define those paths in the first place, to test the world and explore its limits and parameters, and push them back if they need pushing back. I've always felt cut off in certain ways from the world around me, but I don't think that's automatically a bad thing, as it allows me to see the world in a different way and bring something new to the table. Newman was my way of looking at this, and also of asking myself, "OK, let's assuming you have he power to change the world, but in what ways do you want to change it?"

5. Can you tell the readers a little about your idea for the sleeping pills in the city that Newman takes?
I think we sometimes deny ourselves a lot of the wonders of the world by living life too safely and prescriptively. If we stick to schedules and the rules too closely, we don't ask questions or uncover new truths. I guess this was me trying to challenge my OCD. The people in the city taking sleeping pills to sleep without any bad dreams is sort of a reflection on how I was using my routines to disengage with the world around me. It "worked" to an extent -- the way the sleeping pills work in the book -- but sometimes we have to step out of our comfort zones and push ourselves in directions which don't feel natural.


I've just always been fascinated by the idea. That's what writers are, really -- alchemists of the mind. We take in masses of observations of the world around us, then play with them and feed them back to the world in the shape of new stories. I'm interested in people who change the world -- we're all alchemists in one way or another, those of us who don't simply go where everyone else goes, but who try to change the world in one way or another.
Posted by Unknown at 2:00 AM