One horrifying day will change the life of sixteen-year-old Shane Tucker and every other kid in the world.
In a span of mere hours, the entire adult population is decimated, leaving their children behind to fend for themselves and deal with the horrific aftermath of the freak occurrence. As one of the newly made elders in his small town, Shane finds himself taking on the role of caretaker for a large group of juvenile survivors. One who just happens to be Kelly Douglas--an out-of-his-league classmate--who, on any other day, would have never given Shane a second glance.
Together, they begin their quest to find out why all of the adults were slaughtered. What they find is even more horrifying than anything they could have expected--the annihilation of the adults was only the beginning. Shane and his friends are not the unlucky survivors left to inherit this new, messed-up planet. No, they are its next victims. There is an unknown power out there, and it won't stop until every person in the world is dead.

A world without adults and teenagers must learn how to survive. How many times have I heard that plot? Countless. You can't go to the bookstore without seeing at least ten books with slightly varying executions of that exact plot. What's different about The Last Orphans? It's not sci-fi, not your typical dystopian teen fiction with young lovers and an identifiable evil to take down. Plus, it's a horror novel for teens! Those are hard to come by (with the exception of Darren Shan and Barry Lyga), and I think Mr. Harris did a great job on the story.
It does have a vibe similar to Stephen King's The Stand, and I can see what an amazing adult horror novelist he could be. The story doesn't have a lot of unnecessary subplots, with the exception of Shane's crush on Kelly and how bad his relationship with his father was. That's another rarity in teen fiction.
I like the characters, especially Shane. I think a lot of readers will be able to relate to him and Kelly. They're very realistic without being caricatures of teenagers.
I'm not sure where future books in this series will go, as the book would've been great as a one-shot novel, but I'm eager to find out!

Purchase The Last Orphans via: 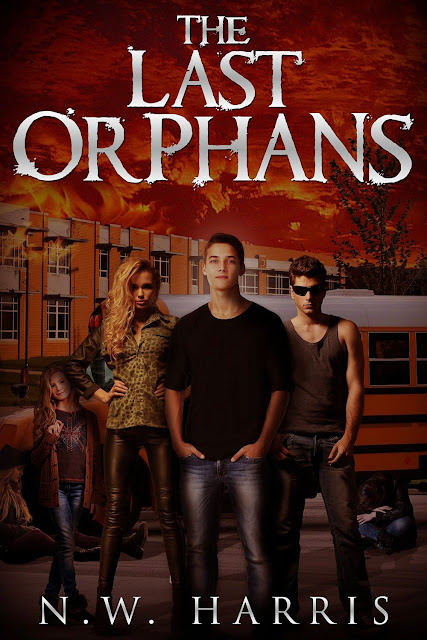 Posted by Kelly Smith Reviews at 10:57 AM