When technology fulfills every dream, reality becomes a nightmare.

Below the streets of New State, the undergrounders fight to remain free of the technological control of the world above. Every night, Yara risks her life fighting New State’s deadliest weapons, the drones. Half human and half machine, their living half tortured until everything human is gone, the drones have only one objective. Kill. And they do it with exacting precision.

Yara is good at her job and committed to her raids on New State. Until one of those raids brings her face-to-face with Joshua, a New State citizen who doesn’t quite fit her preconceived expectations. After a couple of awkward encounters, he shows her the meaning of hooking up—a computer simulation that allows people to live out their fantasies—without the complication of emotional entanglements or physical reality. But what Yara feels for Joshua is very real. And it’s punishable by law.

As she and Joshua grow closer, she convinces him to leave New State for her underground cause. But as the unrest between New State and the underground escalates, and the drones move in to destroy her world, nothing goes as planned. Families are arrested, loyalties are strained, and Yara’s forced to choose between her people and her feelings. The wrong choice could mean the end of her people, and reality could slip away—forever...

Yara’s heart hammered, and adrenaline coursed through her limbs. She turned to run.
“Wait,” the stranger whispered. “I won’t turn you in. I’m out here too.” He obviously didn’t realize that Yara was a rebel. He might not know it yet, but he would soon. Still, he didn’t sound dangerous. Maybe Yara could take care of him. She had never had to kill anyone totally human, but she had trained to do so. At this point, she didn’t think she would need to. The skinny boy didn’t look like a real threat, either.

She turned back toward him and attempted what she hoped was a look of death and destruction.

Instead of being scared, he smiled at her and brushed the hair out of his eyes. Even in the shadowy street, Yara could see the color was a beautiful emerald green. She had a hard time looking away, until his voice jarred her back to reality.

“I could ask you the same thing.”

“Enjoying the night sky,” he replied, each word clipped and succinct. Unable to make prolonged eye contact, he looked toward the stars.

“Aren’t you supposed to be hooked up to an alternate universe, enjoying battle, boobs, or whatever perverted fantasy you want to conquer tonight?” Yara asked, and then instantly regretted her words.

“Hey, it’s not like that. You know how it is.” For the first time, his voice took on a more humanistic quality. He sounded peeved.
She grunted in response. She didn’t know anything of the sort.

Joshua15111 looked at her briefly, quizzically. “Wait, do you know that? Are you one of them? The rebels?”

“Are you for real? Everyone knows about the rebels. You must be one. Are you a rebel? That’s so cool.”

Me and my big mouth. Fear finally overtook her. Vague ideas about running away from or fighting the stranger flitted by, but Yara’s feet felt like concrete blocks. She wasn’t even sure she’d be able to form a coherent sentence if he asked her something about the underground.

About the Author:
Lisa Acerbo is a high school teacher and holds an EdD in Educational Leadership. She lives in Connecticut with her husband, daughters, three cats, and horse. She is the author of Apocalipstick and has contributed to local newspapers, news and travel blogs including The Patch and Hollywood Scriptwriter.

More YA sci-fi in a world where young people need to save the day. That's twice this week I've reviewed a book like this. But I've realized something about the indie writers, as opposed to what you find in every bookstore: they are all so damn unique! Really, I never would've imagined there are so many ways to write YA dystopian fiction until I started blogging.
Ms. Acerbo's novel is different than some of the others because of how technology is utilized. This isn't just an adventure with a little romance mixed in: it's a well planned tale that draws you in and makes you feel add though you're inside the book, not reading it.
With some romance as a subplot and danger lurking around every corner, both boys and girls can read this with no issues. I like the characters, and how the story's dialogue is split between both of the maim characters, not making this overly feminine or masculine. I think Ms. Acerbo has a great handle on plot, character development and narration.
The next fandom obsession? Right here. 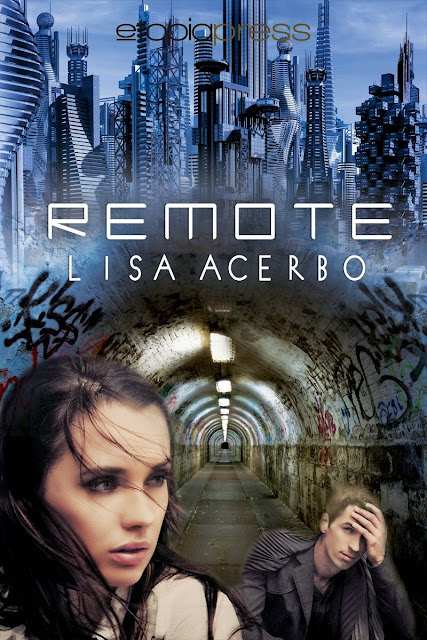