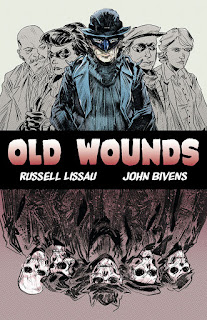 Acclaimed murder-mystery tale ‘Old Wounds’ gets the paperback treatment on Nov. 18
Collected edition of Russell Lissau and John Bivens’ gritty comic book series includes a new cover, a bonus story and behind-the-scenes glimpses
Most comic books tell the stories of their heroes battling villains and conquering seemingly insurmountable odds. But in the four-part series Old Wounds, writer Russell Lissau and artist John Bivens went against the grain, showing the harsh consequences of a crime-fighter’s life after he’s hung up his mask. On Nov. 18, fans of crime and mystery fiction will be able to pick up the entire story in one, deluxe trade paperback edition.
In Old Wounds, retired vigilante Michael Lane’s former associates and loved ones are being killed one by one. As police detectives Frank King and Alyssa Hess move to protect him, Lane struggles to keep his secrets hidden, all while racing against the clock to find the killer before it’s too late.
“There aren’t many comics about what you do in the second or third phase of your life, once youth is past and you’re making decisions for different reasons,” wrote Comics Worth Reading’s Johanna Draper Carlson. “A lot of this works for me.”
In addition to the 96-page murder-mystery, the collection will include a reprinting of detectives Hess and King’s first appearance in Lissau and Bivens’ “One of Us,” which previously appeared in the indie anthology series Omega Comics Presents. The paperback will also feature a look into the collaborative process between the creators, as well as a brand-new cover by Bivens.
Old Wounds will be available on Nov. 18 in comic book stores for $12.99, and can be pre-ordered before Sept. 18 using Diamond order code SEP151548. To find a comic store near you, visit comicshoplocator.com.
Praise for Old Wounds:
“Russell's writing is so real.  It's humanizing the mystery man a lot more than other things have done. John's splash pages are amazing. he does it so well. The visuals tell just as much of the story. Front to back, every part of it is so well thought out.” - The Basement Fodder Podcast
“I never expected to get teary-eyed at a comic. This was an amazing miniseries that I am sad to see end. Both Lissau and Bivens have found a very big fan in me.” - Kelly Smith Reviews
“Lissau's writing style feels concise and tight, as if each word was carefully chosen to have just the right impact. The style pairs fantastically with the hard grit of a crime story such as this. Bivens' art is expressive and evocative, working perfectly with black and white to evoke an atmosphere of grit and shadows.” - The Adventures of Scott
About Pop! Goes the Icon
Launched in 2009, Pop! Goes the Icon (PGTI) is a boutique print and online publishing house, specializing in comic books, graphic novels and webcomics, known for such titles as The Utopian, San Hannibal and Old Wounds. More information can be found at popgoestheicon.com.
Posted by Kelly Smith Reviews at 6:58 PM