I actually started out as a singer/songwriter. I was signing my CD's at the same time that one of my dear friends, Jennifer Griffith was doing a book signing at the same establishment. The fact that someone I knew was an author stirred a dream I had kept to myself for most of my life, and I soon found myself quizzing her on the steps she took to getting published. She invited me to join American Night Writers Association, and my writing improved from there. I was also introduced to agents, publicists and other award winning authors through conferences and networking which this writing group offered. It was a dream come true, really. I had spent most of my life fantasizing a better scenario for whatever life offered me, it just made sense to turn those fantasies into full length novels and get them published.

Oh man, I just did a blog post on this one. If anyone is interested you can visit this link here. http://www.authorcjanaya.com/blog/mvc-and-world-book-day-my-story
But to sum up the main highlights, I really enjoyed mysteries of the Nancy Drew variety as a young girl, and then I branched out as I got older. I love light, fluffy, romantic comedies and books that make you take a deeper look at humanity and our own imperfections. I'm inspired by authors who write about things that may be hard to hear, and authors who simply give me an opportunity to escape for a while to be entertained. In short, I enjoy reading most anything so long as it is well written and doesn't include things that I wouldn't allow a teenager to read.

3. What was the inspiration behind your novel The Healer?

I have crazy dreams, and this instance was no exception. I had a dream about a spirit trapped in a Japanese statue, and when I woke up I could not get the dream out of my head. I had so many questions about the whole thing...seriously, it was driving me crazy. So I wrote down all of my questions and then I started answering them, and pretty soon I realized I had the basis for a great series.

4. Will we ever see these characters again in the future?

I am planning on doing a spin-off series with Angie. If I tell you what it is about it will spoil things for readers of The Healer series. Just know that Angie is going to get her time to shine as well.

I lived in Brazil for two years serving a mission for my church and during that time I became extremely ill and had to return home. The next three years were a bit of a nightmare. There were no doctors anywhere who were able to tell me what was going on with me. I had chronic fatigue, pain and crazy anxiety. Since western medicine failed to help me I turned to natural methods and learned quite a bit in the process. It is important to seek out help from others, but self-healing is an art that I think everyone should take the time to learn. Hope is able to teach other people's spirits to heal their bodies. It is something I wish I could do in real life.

Angie is my best friend Jen. It is the way we interact with one another. I have a great relationship with my parents, and I really feel like that should be more prominent in young adult books these days. So Hope's father is essentially her hero.  Kirby is based off of a young sweetheart I went on a few dates with in high school and who gave me rides to school every morning. I was one year older than him, and I always felt fiercely protective of him on some level. Tie and Victor have traits that my husband has, which is why I like them both so much. Even I had a hard time deciding who Hope would end up with.

I plan on doing a mystery series with Angie. Man I am so jazzed about that concept.  I would also like to do some romantic comedies.

8. What would you do if what you were Hope?

If I was Hope I would spend my days saving the world from every illness known to man. I probably wouldn't even stop to take care of myself which is why it is so good that I have a husband who tells me to eat when I forget, brings me water when I get dehydrated and sends me to bed when I've been on the computer too long.

9. What is it about Japanese culture that made you use it in The Healer?

It honestly had everything to do with my dream. Since the spirit I dreamed about was trapped in a Japanese statue I had to figure out what kind of circumstances could have placed that spirit there. I knew absolutely nothing about Japan, but I knew the best place to start looking around would be in their myths and folklore. I learned about kami, and the different roles that the gods played in Japanese culture. I found similarities that crossed other mythologies in other cultures, and what really peaked my interest was when I came across the god of love and marriage and they described him as being fair with light hair. Interesting. The story grew from my research.

10. You cast your story on your website. Did you always have these people in mind when you were writing the book?

I had a few in mind, but some came to me as the story developed.

I would like to have a few series under my belt with the love songs that I have written for my characters recorded and available for people to listen to in conjunction with the books. I would also love to be able to write some stand alone novels and just relax without feeling that gnawing pressure of deadlines. Eventually, I will go back to self-publishing. I need creative control.

Going crazy. I truly feel like this is my calling in life, though there are plenty of things to take up my time. I'm extremely active in my church callings, I am super busy with four kids, and I still sing and write music. So there is plenty to do, but I would go crazy if I didn't have an outlet for all of the stories in my head.

I am currently working on the third book in The Healer series and once I get finished with the rewrites I am going to let it breathe for awhile and tackle a fun anthology project with a few other author friends.

Oh man. I would so love to work with Richelle Mead. Seriously, I'm convinced that lady can do no wrong. I would also love to join forces with J. K. Rowling who would no doubt dance circles around me in the writing department.

I trained to be a professional ballet dancer when I was younger.
I am a sucker for Sesame Street.
Hugh Jackman is my celebrity crush...oh how I love that man. No worries. My husband already knows. 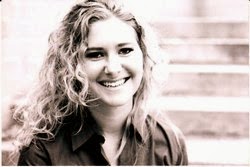