(NOTE: This interview was originally supposed to take place at Long Beach Comic Expo today, but due to personal unforseen circumstances on my end, I could not attend. Ms. McCoy was kind enough to finish these today via email and get them to me in time to start my biannual Long Beach Comic Con week! Enjoy!)

I've wanted to be a writer since I was 8, but didn't really get serious about it until a few years ago. And by "serious," I mean "a person who finished things." I did National Novel Writing Month in 2010, wrote a crappy, but complete 50,000 word book, then rode that daily writing momentum into finishing Dead To Me seven months later. I haven't stopped writing since.

Some of my favorite authors when I was younger were Lois Lowry, Ellen Raskin, Betty Smith, and Anne Tyler. Today, my favorite writers are Jennifer Egan, Kate Atkinson, and Maria Semple.

3. What was the inspiration behind your novel Dead To Me?

I used to write for the 1947 project, which was a crime-a-day blog about Los Angeles history. And L.A. history is insane. You don't have to look very far to find stories about cults and gangsters and police corruption and madams and murder plots. You hear these stories and you think they have to be made up, but then it turns out they're true. Between that and my love for detective novels, film noir, and Veronica Mars, I had to write Dead To Me.

4. Who are your favorite actors from old-time Hollywood?

5. The cover tagline, People who live in the nicest houses have the dirtiest secrets, rings very true for most people. Why do you think there is so much truth behind that statement?

Rich people get away with things. It's not fair, and it's not right, but it's true.

6. Why decide to make this a young adult book instead of an adult novel?

I always wanted it to be YA instead of adult fiction. Not only is Alice trying to find the person who attacked her sister, she's also investigating what her sister has been up to for the four years since she left home. During that time, Alice has become a very closed off person, and she's finally forced to take a good hard look at herself, her relationships, and the fact that she might not be a very nice person. It's the way Alice deals with those things that I think makes the book YA.

7. One of the things you said you'd read recently was the comic book C.O.W.L. by Kyle Higgins. What other comic books do you enjoy?

I really like crime comics. Some of my favorites are 100 Bullets by Brian Azzarello, Gotham Central, Criminal by Ed Brubaker, Tumor by Josh Fialkov, and Incognegro by Mat Johnson.

8. Has working with the Los Angeles Public Library helped or influenced your writing career?

The two biggest ways it's influenced me are its amazing collections and my brilliant colleagues. When I was writing Dead To Me, I referred to the library's online Photo Collection, Map Collection, and newspaper databases all the time. And the librarians I work with are wonderful and inspiring people. Two of my colleagues have written LA history books of their own: Christina Rice's Ann Dvorak: Hollywood's Forgotten Rebel and Glen Creason's Los Angeles in Maps.

9. Would you like to see Dead To Me as a film? If so, who do you want to see play your characters?

Of course I would! My friend and fellow 2015 debut novelist Michelle Levy (Not After Everything) is also a casting director, and she helped me cast the book. Here's what she came up with - I think it's brilliant:

10. Where do you see yourself and your career in the next ten years?

11. What would you do if you were Alice in your book?

I don't know if I could be as brave as Alice is. I am also much worse at cryptography than she is.

12. Will we ever see these characters again in the future?

One of the rules of noir is this: no sequels. If I ever did, I know what it would be about, but I feel like I left my characters exactly where I wanted to leave them.

13. What would you be doing if you weren't writing?

14. Can you tell KSR readers what you're working on next?

I'm working on another YA novel. It's not historical fiction, but I still manage to cram a lot of history in to it.

Thing 1: I used to play bass in an all-girl punk band.
Thing 2:  My best celebrity impression is of Civil War historian Shelby Foote.
Thing 3: I have an astonishingly large collection of vintage cookbooks. 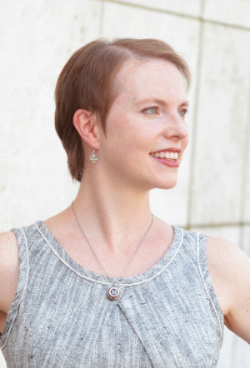