The second saga in the bestselling, groundbreaking Forever Evermore series begins with , where the life of a skilled lawbreaker becomes much more than she ever wanted...
Caroline Jules knows death is imminent. She’s only 22, but as an inmate of Death Row in the most secure Mystical jail, what else could her future hold?
Caro has no idea. Her solitary, transient life is about to get flipped on its head when it is revealed that she is the new Prodigy Elemental, and she has responsibilities and ties that she can’t ever escape. Caro is attempting to run from a brutal past, but the Rulers have other plans for this thief’s future.
But the transition from a self-contained existence to life with the other Prodigies, the Kings and Queens, and even the Elders was never going to be easy, and Caro has secrets she’s loath to share. Suddenly she has friends, mentors, lovers — and they all want to know more about her than she is willing to reveal.
Will Caro ever escape the darkness of all she is, or will she fall deeper into the life that has been chosen for her?

I admit, I didn't finish the first saga of Forever Evermore, due to scheduling issues. But what I did read, I enjoyed. Now, reading Chosen Thief, I know that I will be following this saga till the end, and going back to finish the first one, too!
Number one, Caro is a badass! She's an excellent character, and not typical to this type of story. She's defiant, deadly and sassy with an identity of her own and has no need for a male partner, like many other women in NA fiction.
Now, the paranormal elements are perfectly balanced. I think my biggest problem is that silver can hurt vampires here, when usually it's only werewolves who are vulnerable to the metal. You have a vast array of creatures, from Vampires, Shifters, Mages and more. It's magical, dark, violent and a little sexy, mixing to make a novel many will enjoy.
An addtion, Caro is bisexual, in love with a female Vampire who is a lesbian. It's a healthy, LGBTQA relationship (for a time), and gives a nice nod to the fact that gay love is normal and can be used here, in a supernatural book where there are mostly heterosexual relationships.
Scarlett Dawn is a wonderful storyteller, and Chosen Thief is no exception! 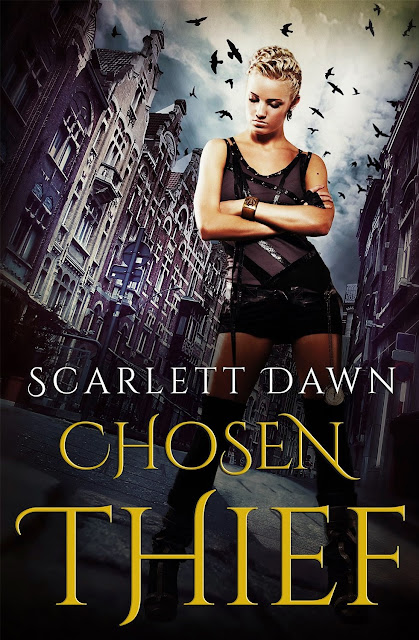