Six billion identical clones make up the entire population of Earth, and William 790-6 (57th Iteration) is exactly like everybody else. In his one year of life he will toil in suburban mediocrity and spend as much cash as possible in order to please his corporate masters. When 790’s first birthday (and scheduled execution) finally rolls around, a freak accident spares his life.
Living past his expiration date changes 790 profoundly. Unlike other clones he becomes capable of questioning the futility of his own existence. Seeking answers in the wilderness, he discovers a windmill with some very strange occupants, including a freakish, dinosaur-like monstrosity. Which is especially strange since every animal on earth is supposed to be extinct…
Dark, haunting, and blisteringly satirical, BILLY AND THE CLONEASAURUS is the story of one “man’s” attempt to finally become an individual in a world of copies.

Well, I've read a lot of stories about how man is just existing, not living. Many of those talk about how the "officials" want us to all be the same. And that's sort of true. But never have I read a story that truly makes it all seem possible (not probable), and very real.
In this Twilight Zone-esque novel, Stephen Kozeniewski brings us to a world of William: one man, six billion clones. Each clone only gets a year to live before it's replaced with a newer model. There are no animals, nothing natural or genetic. Sex is obsolete, as are animals not created in a laboratory (for food purposes only, of course). No one does anything unexpected, and if they do, their entire line gets suspended.
This world scared the living daylights out of me! I'm an individualist, and anything from uniforms to matching tattoos scare me. So to be thrust in this imagined world of clones was very unnerving.
It made me think, what if? For those living lives like toy soldiers, who only do what's expected of them (think Susan Sarandon's character in The Banger Sisters), what if one of them went off and did something unexpected? To paraphrase Heath Ledger as the Joker, "One thing happens not according to plan and everyone loses their minds!"
790 might only have a number to differentiate himself from his brothers, but his heart is different. He's alive because of an unprecedented accident, and he doesn't waste the amazing opportunity he's given. He goes on searching for answers to things he'd never questioned previously. He could be a true inspiration to those stuck in a monotonous life; be it a family of unquestioning bigots, people who rigidly stick to one religion, one job or one particular way of living.
Sci-fi and satire made a beautiful baby here with Billy And The Cloneasaurus, and you need to read this. By far, it's my favorite thing Kozeniewski has written!


Purchase Billy And The Cloneasaurus via: 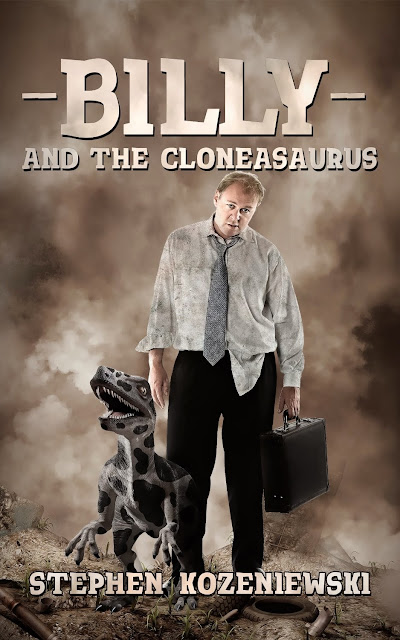