The Rivers Brothers Book One

Life is looking good for Justin Rivers. After winning a country music contest, a top agent from Nashville wants to make a deal, and making it big could help Justin win back his family’s respect after the tragedy he’s caused.

Life stinks for Silver Madison. She loves her teaching job, but a vicious scandal threatens the school, and her cheating fiancé has broken her heart.

So when Silver catches the eye of the up-and-coming country star, romance—and the paparazzi—are the last things she needs. But as much as she tries to avoid the limelight, she can’t avoid Justin’s touch—or the passion that sizzles between them. Justin’s determined to protect his family and win Silver’s trust, but he can’t protect her from the treacherous lies that propel them into the national spotlight. Silver’s school can’t take any more bad press, and Silver’s career is on the line. But when a woman appears claiming to be Justin's wife, Silver’s not sure if her heart can take any more, either…

“Don’t give up on me, Buddy.” Silver Madison patted the dashboard of her sputtering 1966 Mustang convertible. Usually she sped along the highway enjoying the wind in her hair, but today the night-mist blue vintage car coughed along at a snail’s pace. She waved at frustrated drivers who whipped around her and blasted their horns.

“Honking at the choir, people! And that finger doesn’t impress me. I have one exactly like it! See?”

She eased off the busy road and onto a red dirt parking lot outside Hitching Post Arena. The car’s engine wheezed loudly then sputtered into a death rattle. Silver struggled with the powerless steering wheel, guided Buddy to a halt, then shoved the gearshift into park.

So much for having some fun during fall break. She had enough challenges in her life, and now her most prized possession had become a heap of metal and bolts.

“This isn’t funny, Buddy!” Silver opened the door and climbed out, slammed it shut, then walked to the front tire and kicked it. “Just like a stupid, uncooperative male to leave me stranded.”

As if all this wonderfulness weren’t enough, now she had to endure the insanity of a country music contest for the next few hours. Silver didn’t like country music, didn’t want to listen to it, didn’t want to pretend to enjoy it. She knew the songs, heard them on the radio, but sometimes those wailing tunes reminded her too much of the past year. She’d rather be trimming her lawn with nail clippers than be at the arena tonight.

But when her best friend Becky Sinclair had called to say Tulsa People magazine had assigned her to interview one of the singers, and she asked Silver to meet her at the arena, Silver couldn’t say no. Suddenly she remembered a co-worker had dropped Becky off and realized that with Buddy out of commission, they now had no way to get home.

Challenge #995 for the day. Add it to the growing list.

Silver looked up as thunder rumbled and lightning streaked across the sky.

“Really? I’m at the back of this miserable excuse for a parking lot with a dead car, about to be tortured with this stupid music, and it’s going to rain?”

Slipping her fingers under the blue metal, Silver popped a lever on the hood and propped it open, staring at the ancient gears and belts. Yes, she had an engine—for all the good it did. Rubbing a hand over her forehead, she leaned her legs against the front grill. Could this day get any worse?

She hated being called darlin’. The Southern nickname always grated on her nerves, especially lately. The last six months, to be exact. Silver straightened with an exasperated breath.
“Don’t…”

Her breath caught when she saw the source of irritation.

A tall man stared at her, his dark blue eyes shadowed by jet-black eyebrows and hair. He looked vaguely familiar but she didn’t know why. A day’s growth of beard framed a smile, giving his tanned face a slightly scruffy appearance. A black T-shirt clung to the solid muscles of his broad shoulders and narrow waist. Khaki shorts covered his muscular thighs. The dark haired dream-come-to-life stood beside the car with one hand on Buddy’s roof, giving her a delicious glimpse of his flat stomach and making her wish…oh so many sinfully inventive things. She wanted to touch that firm, warm skin and trail her fingers…

Growing up in Edmond, Oklahoma was an amazing experience. I always wanted to be a teacher and a writer. After twenty years as a teacher on both the high school and college levels, I decided to pursue my dream of being a writer. My four children and four grandchildren are my biggest fans, followed closely by my students and friends. 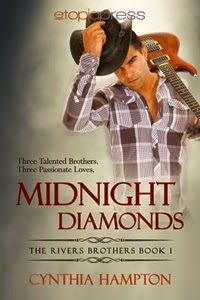 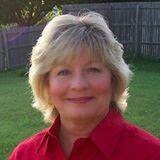