- My name’s Jack Mason. I made a mistake. Took home the wrong girl. Now she’s dead. Cut up. And they’re telling me I did it.
It’s the same cop that tried to take me down ten years ago. Now he’s coming at me hard. And he’s not the only one. Cole Webster, the city’s crime lord, thinks I stole from him. Broke me out of custody just to ask me about it. Then I killed his son. Now he really wants me.
Add to this equation a government agent, and I’m a real popular guy right now. Pretty much everyone I meet wants me dead, lawfully or otherwise. There’s nowhere to run. Nowhere to hide. I’ve got till morning to uncover Webster’s trafficking operation and take the heat off me. And all I’ve got to go on is a pissed off homeless girl with a thirst for revenge.
Guess it could be worse. Can’t quite figure how. -

Jack hates violence against women, but he winds up standing up for the wrong girl, and gets wrongfully arrested for her murder. The murder itself is a very bloody affair, a bit of shock in an already fast-paced novel. You don't see it happen, but the description of the body is delightfully gory.
This book takes you inside Jack's head, you read his thought process as if you were psychic. But you really don't get to know him. It takes the course of the entire novel for you to accurately put together a good mental picture of him, both physically and mentally. He's enigmatic, even with himself, and that makes this story that much better.
Another thing I noticed, is that you don't realize you're reading a sci-fi novel until he mentions that it's a planet called Harem. And you don't care if it's sci-fi or not. You just care if Jack will succeed. Hardcore fans of sci-fi might not like this lighthearted approach to the genre, but I think Mr. Harrison did it quite well. He brought sci-fi to people who might not read it otherwise.
The book is a fast, three hour read, filled with mystery and suspense. The narration is very unique and very realistic. When I finished, I had one question, "When is the movie coming out and please tell me Richard Armitage is available for the lead role!"


Purchase Acts Of Violence via: 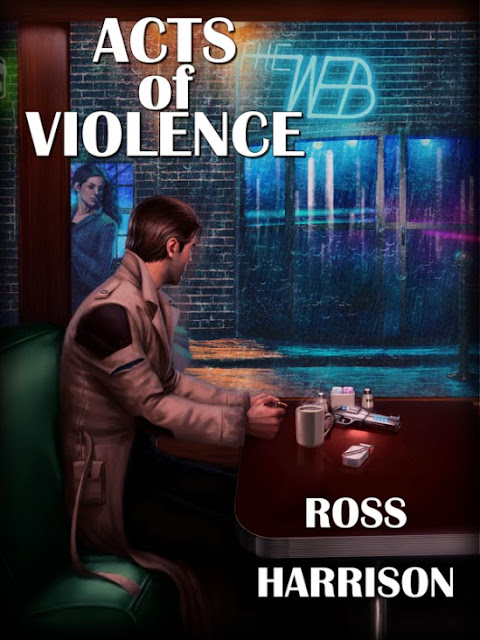