BOOK REVIEW: "No Motive For Murder" by Doug Hantke

A man obsessed with his work.
Psychologist Gary Schaade started receiving tapes and letters from potential killers soon after releasing his bestselling book Psyche of a Serial Killer.
When Gary receives a tape at his office, he is sure it is another entertaining attempt to scare him and his wife. This tape was different.

A confession to prove his theory.
Gary always theorized that the deadliest of serial killers were ones without motive. As more tapes arrive, it becomes obvious that Gary may finally have the confession he’s needed to prove it. But how far will he go?

A killer who strikes close to home.
When the murders get more personal, Gary will have a difficult choice to make. Will he sacrifice the lives of those close to him to further his career?
Is it truly possible to have No Motive for Murder?

[NOTE: Yes, I am the proud editor of this book. No, my review does not reflect on that fact. I never, EVER grade books on editing, just on plot, character development and originality.]

When I'm asked to edit a book, I'm not picky about the content. I want to see what you've done wrong and fix it. When I'm asked to review a book, however, I'm so picky you might not believe it.
Thrillers, the bloodier the better, are a favorite of mine. It takes a lot of talent to creep readers out using only humans as your subject matter, not paranormal creatures. Stephen King and Thomas Harris have perfected that art, but precious few others have.
Doug Hantke has.
As I read through the story as a reader, not an editor, I realized how truly gripping the simplistic narrative was; how you could picture every bloody scene with violent vision and feel what Gary was feeling, every step of the way.
Gary is not exactly a sympathetic character. He speaks ill of his patients, doesn't pay enough attention to his wife and flirts with a particular patient. But that's part of the story's charm. You don't have to like a character to like said character's story.
The story itself has multiple possible endings, each of them plausible and easy to picture. I had a solid guess at who the killer was, changed my mind, and then changed it back before the story ended. Hantke is a master of misdirection!
Honestly, this is one of my favorite books. I'm so proud to have been able to be a small part of its creation. Remember this author's name: you're going to be seeing it on the New York Times bestseller list one of these days!

No Motive For Murder is live on Amazon:

You can add it on Goodreads now! 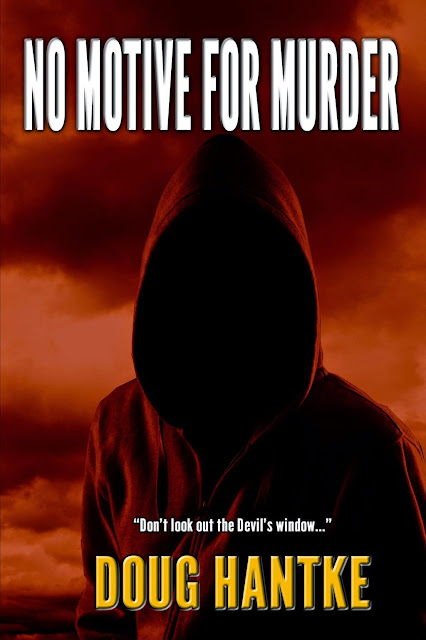 Posted by Kelly Smith Reviews at 12:55 AM