[This book consists of three novellas, but I'm reviewing it as a whole rather than in three separate parts. Also, it is for readers 18+, due to violence, language and general fear.--KSR]

It starts with "Where The Dead Dwell", a take similar in plot as The Haunting of Hill House, or with the aspect of the Marsden House in 'Salem's Lot. A house where bad things have happened, and it turned the house's energy evil. A type of story that I, personally, don't think authors write about often enough.
The second story is "Watching Black Mountain". It's about a man named Zachariah who, from a twisted childhood, thinks he is God and forces others to believe the same.
The last (and shortest) also deals with religion, "The Devil Incarnate". It deals with a detective who is being haunted by the ghosts of children who had been murdered in what looks like a Satanic ritual.

Each story is unique, but each written with the author's particular style. You know from the first sentence that you're reading a Vincent Macraven novel. He's a new breed of horror novelist, focusing on religion and evil energy but also adding in the human condition, how nature and nurture could be the undoing of a person. Or a place, even.
These stories are not for the faint of heart. Usually I write an 18+ warning for novels of a sexual nature. This time I'm warning readers because these stories are dark, black as Hell. Frightening, even for me, and I am not easily unnerved.
All of the themes here have been written before, but not in this way. If other authors have danced on the edge of darkness, Macraven jitter-bugged his way right down into the inky depths. While I don't think that a good horror story needs excessive violence to be frightening, some stories are complete only when sincere depravity is evident, and these are the latter type of stories. The language drags you in, and the imges make you afraid to go to sleep at night.
Vincent Macraven is the next big thing on horror, that's for sure! 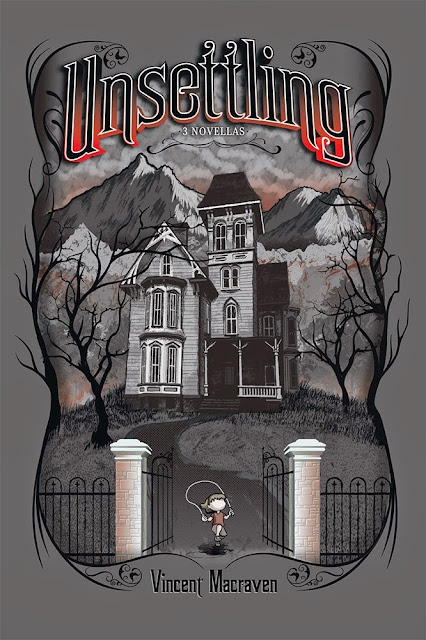