After Doyle found himself face-to-face with Spring Heeled Jack in issue #2, he finds out something peculiar about the creature that appeared to be a vampire. And "Jack" has finally found himself a worthy opponent.
In this issue you'll find out what "Jack" is, and see how Doyle plans on stopping it. But will it work?

The third installment of SHJ finds us with a new artist. Martha Laverick had to leave the comic, taking her simplistic, soft art with her. She was replaced by Seth Kumpf, an artist whose style is similar to Mike Mignola and Gabriel Bà. It's thicker, rougher and brighter than Laverick's work, and the characters do look different here, but it still works. And of course the writing is as good as it's always been. If anything, that got better.
I love the depth of the tale, with an obscure paranormal creature being brought to light. I only heard of this particular monster in popular fiction once before, on am episode of the CW show Supernatural.
Plus, we get an appearance by Harry Houdini! I am curious to know who else we might come across in the next issue.
Another cliffhanger ending, another book that leaves me wanting more!


Purchase Spring Heeled Jack from your local comic shop or from these online retailers! 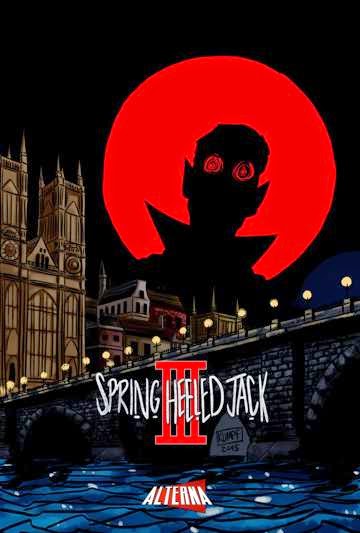