Two men claim to be the Second Coming of Christ. Each claims the other is Satan in disguise. But only one is telling the truth.
In The Second Coming: A Love Story, the devilish new novel by Scott Pinsker, the culture war between Red America and Blue America turns shockingly real when two self-declared saviors appear on earth. The first “messiah” attracts legions of liberal and secular-progressive followers with his message of New Age brotherhood, quickly becoming the darling of the left. The second “messiah” preaches fire-and-brimstone traditional Christianity, gaining a grassroots army of conservative worshippers ready to battle to the death.
It’s finally happened: Red America and Blue America are headed for Armageddon!
First-time novelist Scott Pinsker is a Tampa Bay-based celebrity publicist who has also written for FOXNews.com as a marketing expert. As Pinsker tells it:
“Late one night I had an unsettling thought: If the Devil truly wanted to con mankind, he wouldn’t have a pitchfork and horns. All those horror movies have it wrong; a pitchfork and horns are bad marketing. Instead, his smartest strategy for activating new followers would be to appear as a holy man – and claim the faith of his target audience. Because if I were Satan’s publicist, that’s what I’d recommend.”
Scott Pinsker has worked with a long list of athletes and entertainers, ranging from scandal-plagued NFL stars to Saturday Night Live alums to Grammy-winning icons. While he insists that his story’s characters are wholly fictional, he freely admits that the Red America/Blue America political divide is directly ripped from the headlines:
“We’ve become so polarized that we automatically assume the worst about our opposition. The most sinister explanation becomes the dominant narrative – and each side is skilled at exploitation. So in The Second Coming: A Love Story, you have conservatives firing-up the Tea Partiers on talk-radio shows, and liberals decrying their ‘extremism’ and ‘lack of inclusion.’ You have evangelicals, businessmen and born again Christians waging a multimedia Holy War against secularists, urbanites and liberal activists – and neither side will cede an inch. Sadly, none of this was a stretch: since we’re already predisposed to believe that the other side is evil, an all-out apocalypse is simply the natural progression.”
Divinely provocative and wickedly intelligent, The Second Coming: A Love Story will keep you guessing who-is-who until the very end…
…and possibly even after that.

If you judge a book by its cover, you'll either think to disregard this book because A) you're not interested in religious mumbo jumbo, or B) you're so religious you are afraid that the story will be blasphemous. You'd be wrong regardless. In fact, you don't need to have a solid opinion on God and Satan to read The Second Coming: A Love Story.
Let's just remember one thing before you read further: no matter how much research went into this novel, it is fictional. You don't need to study all of its implications to enjoy the tale.
That being said, as a Roman Catholic-raised girl, and still liberal Christian, I enjoyed the heavy homework that Mr. Pinsker must've done to make this book as well-rounded and interesting as it is. When you know an author took their time when writing, to ensure that they got everything right, you also know that the book will be a great one. Passion is key in writing, just like religion, and we see Mr. Pinsker's passion plainly on the pages.
The tale of Jesus's second coming is an old one, as is the belief that Satan already walks the earth and they will inevitably meet and cause the Apocalypse (see Supernatural season five). What we usually don't get is a detailed analysis of the implications of two people claiming they are the Second Coming, and how it effects humanity. There are socio-political, pseudo-religious and sociological humanities issues tackled here, as Republicans and Democrats are pitted against each other under a guide who could turn out to be the Enemy. I won't give too much away, but I've had long political talks with many different people, and I've always heard a popular opinion on just who the Devil is. This author seems to share in this view, which is quite interesting. (Yes, I am a believer in the true second coming and that the Devil will try to lure us all away before then. Don't judge me.)
I read this twice: once as a serious novel to study, and once purely for entertainment purposes. Both times I read a different, but no less interesting, book. It takes a lot of talent to do that, and I can honestly say that I recommend this book to everyone. Not all of you will like it, but I think you should at least try to read it, no matter your beliefs and background.

Purchase The Second Coming: A Love Story via: 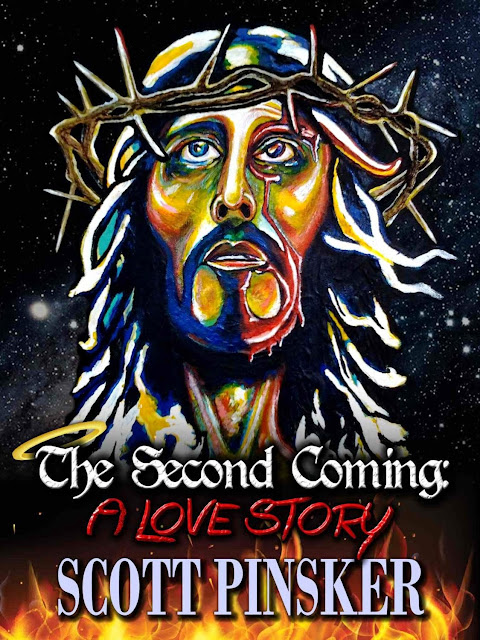