When I was little, my mom got me into Archie Comics titles Archie Digest amd Sabrina the Teenage Witch. After those, when I was seven, I found Sonic the Hedgehog. I became an avid fan and still am till this day. My favorite character is Knuckles the Echidna, and his entire race/backstory was my favorite thing to read about, especially the kick-ass Lara-Su.
I never really noticed who wrote or drew the comics. Back then, I didn't care. But when I accidentally came across Ken Penders' booth at LBCE and realized that he was the one whose stories I'd been reading for fourteen years, I was star-struck! When he agreed to an interview that day, I was over the moon!
Here he talks about his plans for Lara-Su, amd much more!

[Quick note, the patch I photographed is what the Royal Secret Service: Strategic Acorn Ops wore in STH, particularly Geoffrey, their leader.]

1. When/why did you decide to get into comics?

I wanted to do comics ever since I was a little kid. I was influenced by the work of Jack Kirby on Fantastic Four. That just blew me away and I didn't understand it, I didn't know how these things were done or who did it, I just knew I wanted to create comics. I would draw my own comics as a kid, and eventually I found out that yes, there's actual companies that publish this stuff, ans this is what you have to do in order to go to.work for them. It was qa process,.but I always wanted to it all my life.

2. Aside from Fantastic Four, what were your other inspirations?

My favorites back then were Fantastic Four and Batman, especially Carmine Infantino's interpretation of the character. I loved Jim Starlin's Nick Fury Agent of S.H.I.E.L.D. stories; I became a huge S.H.I.E.L.D. fan because of those. And Gil Kane, his Green Lantern. Those are main favorites of mine.

3. You did create different characters for the Sonic The Hedgehog and Knuckles The Echidna comic series for Archie Comics. Why did you choose to expand the Lara-Su storyline?

Basically, I don't own Sonic or Knuckles. But I own my characters, I own my stories and I actually had this long arc that was designed to take Knuckles from birth to beyond his lifespan; show his legacy. I never got to do that, so when this whole situation came up with regards--and Archie Comics wasn't at fault for this--but SEGA used my characters in a video game. At that point, for example, my work had not been reproduced or reprinted the way it is now. There had been no reason to go forward with any claims or anything, because what would I be claiming infringement on? You have to be wronged first. So, when the video game came out and everybody was contacting me saying, "Okay, here, they're using your stuff as part of Sonic Chronicles." That's when the whole thing came about, going for my characters and stories, and as I was going through that process, people asked me, "What do you want out of this?" and I said, "I want to be able to continue telling the characters' stories." So then when I really sat down and thought about that, what it meant, it became obvious that Lara-Su, instead of Knuckles, would be the vehicle for continuing to tell the complete story pf what I already had planned to do.

4. Can you tell us a little of what you have planned for Lara-Su?

In a general sense, I am picking up the story where I left her off in Sonic #144, and I have a seven book arc. During the course of that arc, she and the rest of the characters are going to grow and have their own storylines and once you get to the ens of it, that's it: you're going to have a complete story. It's not designed to go on and on, it's okay, here's this big epic. There may be side stories along the way that people may want to see the blanks filled in on, but here's her story. By the time we get to the end, we're going to be looking at the legacy she's creating for the next generation.

5. Do you have any plans for or would you like to see an animated show for your arc?

6. You've worked for many companies aside from Archie, including Disney and Marvel. What would you like to do next? Any particular company or story you'd like to be a part of?

No. The thing I want to do next, I am already doing, The Lara-Su Chronicles. I am currently working on a film The Republic. We actually have a completed film, it's just a matter of getting all the post-production work done. I finally have a gentleman assisting me with the audio, because that's not my forte. And he's got Academy Award nominations. So we're working on getting that ready for release, on iTunes, Netflix and Amazon Instant Video. I've spoken with the main actors and they're more than agreeable to go forward should we be able to go forward with further installments of that film. Right now, my son is helping me cut the trailer for my creation The Lost Ones, so we can shop that around. So, it's not so much a matter of limiting myself to just comics. I have a whole broad spectrum of things I can persue, and I'm doing it. It's just a matter of everything is time-consuming, everything is dependent on other people doing their parts as well. The only thing I have.complete control in is just getting the Lara-Su story and art done. And then whatever happens beyond that, that's up to what other people get involved.
I don't have this mindset of working for Marvel, DC or Image for example. Or Dark Horse pr whatever company like I did when I was younger. It's totally different now. I'm more into my own stuff than working on Superman or Batman.

7. You have done many different forms of art and media. What haven't you done yet that you'd like to?

Sculpture! 3D modeling. I've dabbled in some 3D modeling, but it's been very basic, very beginner. I really need to learn how to do it better, but I just don't have the time.

There are plenty of people I'd love to collaborate with! It's a matter of if we could find a project that interests the both of us, if our schedules come together. For example, my friend and partner Larry Houston approached me about this film project but the problem was what can we fit on this schedule? How do we move it forward? That sort of thing. There's all sorts of questions that need to be asked and resolved. With regards to a comic project, the people I'd want to work with are long past doing any such thing.

9. Thank you for participating in the interview. Can you please leave the readers with three things that may surprise them about you?

[Laughs] You know, that's a really difficult question for me, because I don't know how to answer that without somebody saying it's self-serving. I actually do love Sonic, contrary to popular belief! I actually am not angry or upset with Archie Comics in any way, shape or form; I am actually very proud of the work I've done for Archie and my association with the company's history. I think people would be surprised that I graduated high school at sixteen and went into the military as soon as I turned seventeen. 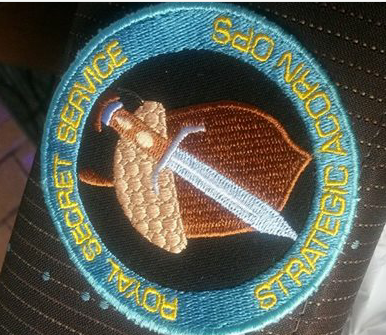 Posted by Kelly Smith Reviews at 5:11 AM