They've hidden their secrets for too long. Today we plan to coordinate a counterstrike on them. I will let the public know of their actions. Every little dirty detailed brought to the surface, so that the sheep can learn the truth. What happens after that? Well, that's what makes humans so interesting. They're always unpredictable.
In the epic conclusion to this trilogy we learn who the mysterious CAPE are, and why they're hunting people who are labeled as experiments. The war has begun and many shall fall before one rises.

This is the conclusion to Those Devils and 0-9, where we learn everything about the mysterious CAPE, just who and what the experiments are. You don't have to read Those Devils to get the gist of The Toys, but I would recommend at least picking up 0-9 first, to familiarize yourself with the narrative. With many names being numbers, it helps to start at the beginning.
With this being a short story (forty pages on my ereader), I can't say much without giving spoilers, so forgive my brevity.
I enjoyed the idea of those who feel wronged striking back against their aggressors. I love that they consider themselves people and not experiments. It's a story of self-preservation, self-awareness and rebellion.
Of course, this is James DeSantis we're talking about, and it wouldn't be the same.without gratuitous bloodshed. The first chapter sees a suicide, and voodoo doll-like toys (hence the title) are used to brutally murder people and make them look like suicides.
In some places the violence is there for a reason, and in some it is just added shock value, and it works so wonderfully. I always enjoyed a good, violent horror story, and this is just that. But it's not just that: it's also a little bit of sci-fi, some satire (brief) and even a little heart.

5/5--an enjoyable ending to a short series! 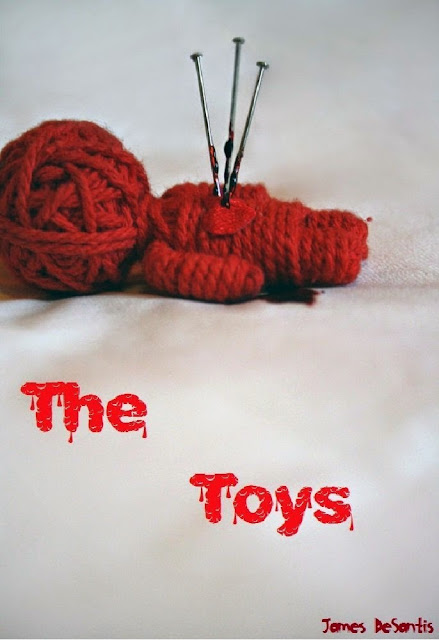